A historic step for Rivier baseball in works for this spring 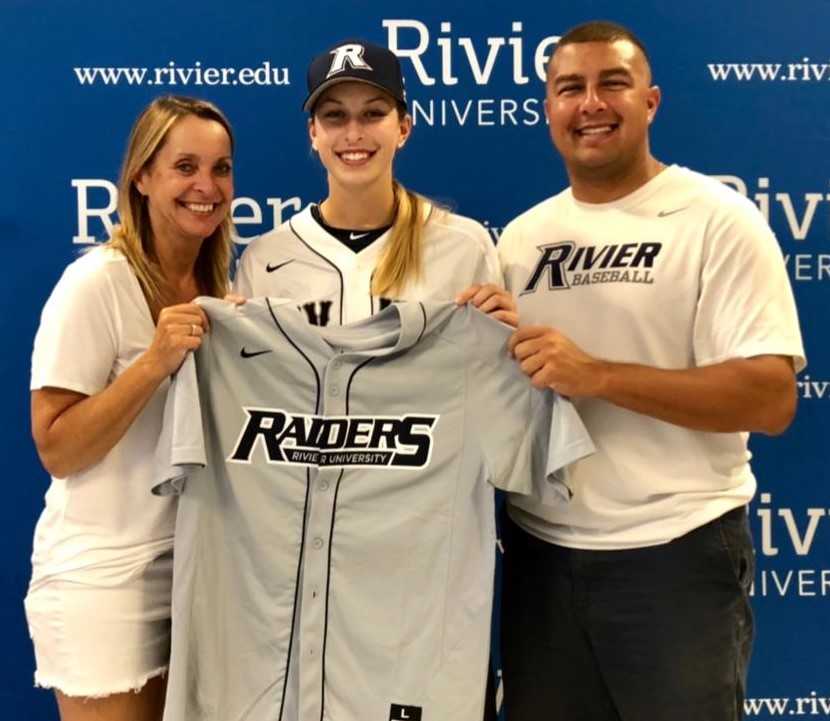 Photo courtesy of Rivier University Vancouver area native Marika Lyszczyk, center, and her mom Sandy, and Rivier University's Anthony Perry are all smiles in announcing Lyszczyk as the school's first-ever female recruit for baseball, and one of if not the first NCAA positional baseball female recruits in history.

NASHUA – Marika Lyzsczyk was told several times that she’d eventually strike out when it came to playing baseball.

No she isn’t, as barring any unforeseen occurance, she’ll be on the Rivier University roster for the 2020 baseball season as a catcher. Lyszczyk is believed to be the first, or one of the first recruited female positional players – meaning non-pitcher – in NCAA history. The Telegraph has reached out to the NCAA through its official inquiry process to check Lyszczyk’s historical status but has not yet received a response.

Regardless she’s certainly Riv’s first-ever female baseball recruit. But the concept of a female playing college baseball, believe it or not, is not new to the Nashua area. The now closed Daniel Webster College also made baseball gender history when Australia’s Christal Fitzgerald was said to have become the first international player to play NCAA baseball, and fourth female in NCAA history from 2007-2010. She was a pitcher-infielder and a mainstay for the Eagles for four seasons.

The story as far as Rivier is concerned came about thanks in part to Perry’s ties from his days as a Nashua Pride bullpen catcher in the independent Atlantic League.

Lyszczyk was discovered at a Major League Baseball sponsored camp/tournament for girls – the MLB GRIT Invitational — in Dallas’ Global Life Field by former Newark Bears and current MLB scout Jeremy Booth. He reached out to his old friend from their Atlantic League days, Perry, to see if he was interested

“It kind of just progressed from there,” Lyszczyk said. “We’ve been talking ever since, going back and forth with the process.”

Perry has had a long relationship with Booth.

“He gave me a call and said ‘Hey, I’ve got an opportunity for you,'” Perry said. ” I thought (Lyszczyk) would be a perfect fit, knowing you and the environment you have at Rivier and your boss is very progressive.’ He knew that Joanne (Merrill, Raiders athletic director) would support this, because not many ADs would.”

What did Booth see?

“First of all, she looked like a good baseball player with collegiate level skills,” he said. “We just said, ‘You know what? That girl can play college baseball.’ She’s got skills that apply.”

Lyszczyk has been playing baseball since she was four. She did play softball and baseball until the seventh grade, when she decided she wanted to stick with baseball only.

“I was a pitcher back then,” she said. “Pitching in baseball is so much different from softball,and I just enjoyed it a lot more. And I seemed to be a little better at baseball and figured I could always come back to softball eventually.”

That never happened. Lyszczyk played baseball in a high school equivalvent league. She started catching as a freshman, she really likes being involved in every play, every pitch defensively – even though she’s tall (5-foot-10).

“I love it, it’s my favorite position,” she said. “Everybody always told me if I wanted to go play college baseball I’d have do switch over to pitching. But it turns out that when I went in March they wanted me as a catcher so that’s when it kind of shifted in my mind that it was something I could obtain, and this was something I could do.”

She remembers when she threw her first base runner out.

“Starting out, people said, ‘Oh, if you’re a girl, you have to pitch,'”Lyszczyk said. “I was like, ‘I wat to catch, I want to be involved in every play. So I remember throwing the first person out. The feeling from that, the high from that was just unreal.”

Lyszczyk said she has always had the desire to play baseball in college.

“I always wanted to push it as far as I could,” she said. “This is something I never thought would happen.”

If there’s anything Lyszczyk really needs to work on, it may be her hitting.

“It’s not a power-oriented approach,” Booth said of Lyszczyk’s hitting ability, “but it’s a ‘get-a-hit’ approach.”

“Hitting has been a little hard, especially since I played in a wooden bat league.”

But in the recent World Cup tournament in Mexico, playing for the Canadian National Women’s Team, she hit around .300-.350. Competition was against Team USA, Puerto Rico, Mexico, Nicaragua.

“It was such an unreal experience,” Lyszczyk said. “It was so eye-opening seeing how the other (countries) played baseball.”

But the GRIT camp in Dallas was also an eye-opener.

“It was a super awesome opportunity,” Lyszczyk said. “There were only six Canadians invited, plus six girls from Puerto Rico.We got to combine with the U.S.and we got to play at Globe Life Field (current home of the Texa Rangers).”

Lyszczyk admitted she didn’t think anything was going to come of it, but she got word that she was being scouted. “It was crazy, that being my first time,” she said.

Lyszczyk has heard of, but never met, Souhegan alum Beth Greenwood, who played for the Saber varsity as a backup catcher and also was playing for the U.S. National Development Women’s Team this past August.

After all, the female aspect of baseball is a fraternity.

“She’s been all part of the same system that I was in” Lyszczyk said. “I know so many girls now that are from all over the states. I think that’s so awesome, to be able to create bonds.

“When I come here, it’s like ‘I know this person in Wisconsisn.'”

Lyszczyk thinks back to the first time she ever played in a baseball game.

“I was so young,” she said. “I don’t really remember a lot, but I remember progressing, getting a little bit older, I played with the same guys year after year and I loved it.”

Lyszczyk’s mother, Sandy Lyszczyk, thought that her daughter would get more out of baseball than softball, so she switched her over.

“They (baseball players) just did more,” she said. “It’s not that they were better or worse or anything.”

She stuck with softball because her youth baseball coach coached that sport as well and wanted her to play.

And as a youth player Lyszczyk told Sandy she wanted to be Hannah Montana, the Disney Channel character from the show some 10 years ago played by Miley Cyrus who was a student by day and pop star by night.

“I said, ‘What does that mean?'” Sandy said. “And she told me, ‘I want the best of both worlds.’ So we did both until grade eight. She was just better at baseball.”

“I grew up doing it, so it’s kind of really natural for me now,” she said. “At first, at home, it was hard for guys to get used to playing on the same team, but I’ve played with everybody for so long.

“And the culture and society is changing. Women are playing sports now, everybody is super accepting at what I wanted to do. They know I want to be there to play baseball.”

Perry feels that “I think people are scared to be the first one through the wall. People know I’m willing to take a chance on anybody I think is going to help us win. If I didn’t think she would help us win, I never would have entertained this in the first place.”

But the scouting report that Booth sent, he said, was very detailed. He also looked at her recruiting video. He discussed it with associate head coach Louie Bernardino, and Bernardino told him he thought Lyszczyk could help.

“So I said, ‘Let’s do this,'” Perry said, noting he trusted Booth who has been a scout in the Seattle and Milwaukee organizations. He also saw the video, and being a former catcher, liked what he saw.

“She’s got good feet, receives well, and she can throw,” Booth said. “It’s the way she handles herself like a quarterback on the field.”

In fact, Perry said the only way he could tell she was a female from the video he saw was when she moved her head and the pony tail was in the back.

“And it’s amazing knowing she only started catching recently,” he said. “She’s picked up things so fast. And with the knowledge I’ve had, I feel I can help her, build her and make her better over the next four years.”

Lyszczyk got her first look at Rivier last weekend. She also saw Holman Stadium, which the Raiders use when it first becomes available for use in the spring.

“I think it (Nashua) is beautiful,” she said. “It’s a lot like where I’m from. The facilities are incredible, I can’t wait to play at Holman Stadium. And the guys are so awesome, and I can’t wait for the season.”

She’s expected to be officially enrolled at the first allowable date at the end of October for Riv’s second semester. Booth said he felt Rivier and Perry would be the perfect combo for Lyszczyk to pursue her dream.

“Riv is going to be a great place for her,” he said. “It’s a great region up there, and Anthony will be great for her as a coach – open minded, great with people.”

After her visit last weekend, the plan is for Lyszczyk to be back for classes beginning in mid-January, and baseball workouts begin right then. When asked what the highlight of her baseball career is, Lyszczyk didn’t hesitate.

“This,” she said as she sat in the press box at the newly dedicated Joanne Merrill Field. “I’ve been waiting for this moment all my life. Do something new, and make sure girls know that everything can become possible, that there’s an opportunity for them to play at the next level.”

And she’s a perfect fit here.