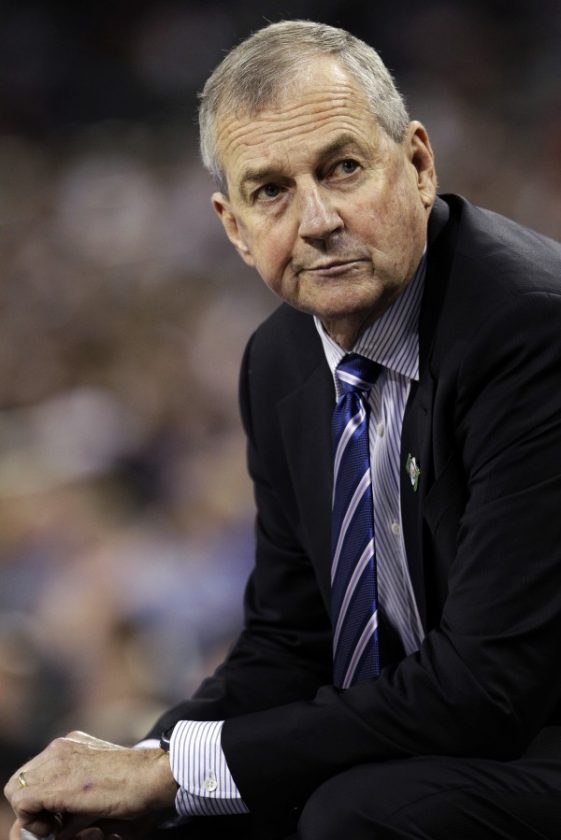 And now, Bisson will look down the sideline on Saturday and realize he’s coaching against the UConn legend, who is coaching the University of St. Joseph (Conn.) first-year men’s basketball program.

The Bluejays will visit the Raiders for the first time Saturday at 5 p.m. at the Muldoon Center. Bisson said it’s likely to be the “craziest game day experience we’ve had since the 2007 conference finals.”

Tickets, going for $10, have been gobbled up by most of the students on campus but some local businesses, Bisson said, have also bought some bleacher sections. There will probably be a crowd close to 400.

The West Hartford, Conn.school went co-ed just this year but has competed with Rivier in the Great Northeast Athletic Conference in women’s sports. The Bluejays are 11-8 overall, 2-3 in the GNAC.

Calhoun retired from UConn six years ago after a stellar 26-year Husky career that included three Division I NCAA titles (1999, 2004, 2011). He coached 14 seasons at Northeastern Unversity before heading to UConn.

“But it’s great. I’m doing the same thing as somebody else who has done it better than anyone else who’s ever done it.”

Bisson’s Raiders have struggled mightily this season, coming in at 1-17, 0-6 in the GNAC. However the Raiders have a top local player, former Nashua North standout Nate Hale, who is averaging 17.5 points and 3.8 rebounds per game.

“We’re playing all right, but we’ve obviously struggled with wins and losses,” Bisson said. “But the first class I recruited are now juniors, and it’s good to see they’re eyes are open. There’s no substitute for experience.”

Bisson said Calhoun’s presence at St. Joseph’s will have an impact on the Raiders and other teams in the conference. That was his first reaction when Calhoun’s hiring was announced.

“I thought now there goes a good bunch of kids from Connecticut,” Bisson said. “If they’re good ballplayers, they’re going to want to play for him. I figured they were going to be good right away, and they’re all freshmen.”

The Raider women will play St. Joe’s at the Muldoon earlier in the day at 1 p.m. Then the gym will be cleared in anticipation of the 5 p.m. nightcap.

Here’s a look at how some other locals are doing at other schools:

Former Campbell standout Hannah Neild of Litchfield, who started her college career at Merrimack College, recently scored her 1,000th point for Gallaudet University after just a season and a half for the Bisons after transferring two years ago. Currently she’s the top scorer in the North Eastern Athletic Conference (NEAC) at 25.3 points a game and fourth in the nation in scoring. She led the NEAC in scoring a year ago ….

Former Bishop Guertin standout Mark Zoda, now at Bentley University, was recently named the Northeast 10 Swimmer of the Week as well as Rookie of the Week. Zoda, just a freshman, finished first the 100 free in two recent meets as well as helping Bentley University to a victory in the 200 medley in one meet, and won the 50 free and was part of the winning 200 free relay team in another…

Former Bishop Guertin standout Meghan Cramb is averaging 8.7 points for Assumption, which ranks her third on the team in scoring. She’s also second in minutes played per game at 26.4.