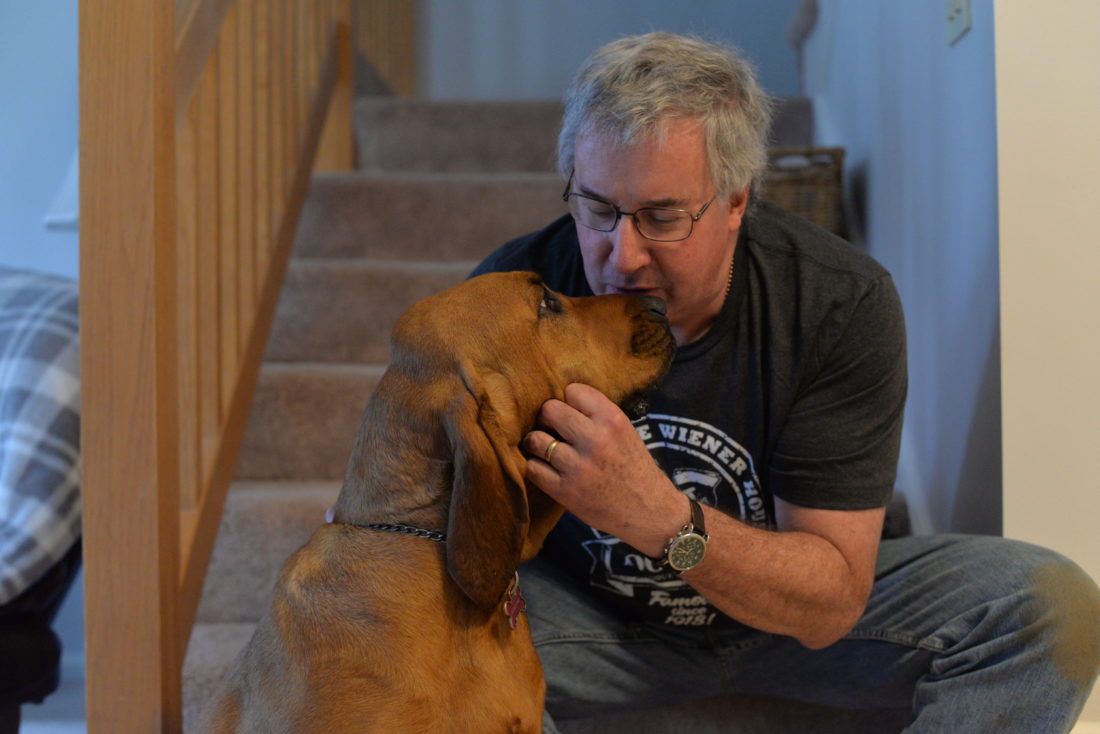 NASHUA – A lost red bloodhound was reunited with her owner Saturday morning after bolting away Wednesday evening, fending for herself since.

Charlie Lange traveled from Sioux City, Iowa, to Nashua to visit his sister, Margie Lange, after more than a decade since seeing her last. He brought one of his dogs along for the ride. Lange said over the course of his roughly 22-hour drive to Nashua, Blossom Mae did fine, and had a blast sniffing out all the new smells along the way. However, once in Nashua, Lange walked Blossom Mae up the walkway to the front door of his sister’s home on Walden Pond Drive, and as he was unhooking her leash and opening the inner door to his sister’s, Blossom bolted.

“She went right through me and knocked me over,” Lange said. “I tried grabbing her, and then I fell down, and when I got up a second later, she was gone, she was gone.”

When looking up and realizing his best friend had disappeared, the first thing to run through Lange’s mind was he was not going to be able to return home to Iowa without her. Back home, he has a wife and kids, another bloodhound as well as foster dogs.

“It was a flip of the coin which bloodhound I was going to take, and Blossom won, and the wife looked at me and she said, ‘don’t let anything happen to her,'” Lange said.

He explained how he assured her nothing was going to happen, yet the minute he arrives at his destination, Blossom bolts off, which resulted in a rough first night in New Hampshire. His sister immediately called the Nashua Police Department to report the missing dog, and then the search began. Margie’s partner, Geoff Daly, said the police took note, and all the on duty officers knew about the situation Wednesday night. They also contacted Granite State Dog Recovery for assistance, and then hung posters all throughout the neighborhood. In addition, on the first night of searching, Daly and Lange went to Nashua Fire Rescue for some assistance. Lange knew NFR most likely had a special thermal imaging camera that would detect heat. He said they came out with their ladder truck to help.

“When they came back down, they detected something on the camera, so they stopped,” Daly said. “They all dismounted, and they went up onto the railroad section, but they think it was maybe a possum or raccoon that was picked up.”

After an unsuccessful first night of searching the city, they returned home.

After climbing into bed at around midnight or 1 a.m., Lange said he could not sleep, and he got up a short while later at 3:45 a.m.

“I was just shaking, because I couldn’t sleep and I was just scared,” Lange said.

So, he got into his pick-up truck and went down toward the tennis club nearby his sister’s house and continued the search. While driving around in the area of the railroad tracks, he ran into some Nashua Police officers. They were shining their lights at him, as he was shining his lights back, hoping to find his four-legged friend. The police were just curious what he was doing up there at such an early time, but after mentioning he was searching for his red bloodhound, the police let him carry on, as they were already aware of Blossom’s disappearance. Later that morning, once the sun was up, he and Daly did more rounds, stopping in at the Humane Society for Greater Nashua, and various other locations around the city. That trend continued into Friday, where they once again scoured the city, hanging posters along the way. Both Daly and Lange explained that Granite State Dog Recovery helped immensely in reuniting them with Blossom by walking them through their protocol for retrieving missing dogs. Between the help from Colleen Goleman at Granite State Dog Recovery, Nashua Police and Fire and community members sharing posts from the Nashua Civic Sounding Board and Telegraph Facebook pages, Blossom was found Saturday morning.

“I can’t believe how this town has responded,” Lange said.

“I found her, and this is the weird thing, because you see the color of her, if you looked at all the leaves, the color of the leaves are brown and red and what have you,” Daly said. “She was hunkered down in the Edgewood Cemetery amongst all that stuff, virtually camouflaged because of her color.”

Daly explained how he and Lange had driven past where Blossom was found without noticing her, and Goleman had also seen her earlier, but Blossom was on the move. Once Daly had spotted her, he doubled back, and saw a piece of wood move, but that piece of wood was her head moving. A call was then made to Goleman who came wielding treats and a leash. Blossom was about 25 feet away, and she threw some food toward her, and Blossom didn’t move at first, but as the food fell closer to her she began eating, and that’s when Goleman was able to get up to her. Blossom did not rise up off the ground, allowing Goleman to drop a special leash over her head and tighten it. Once tightened, Blossom rose up and walked out of the woods with her. The two men explained that a Nashua Police offer was present and knew exactly what was going on.

“He stayed right with the vehicle, and when Charlie came over, it was like a second reunion, she was all over him licking him,” Daly said.

“The relief, I could feel the knots come out,” Lange said.

Lange received the call that Blossom had been discovered and captured OK at 10 a.m. Saturday, and shortly after picking up his best friend and reuniting, he brought her to a local veterinary hospital to get checked out. For having survived a couple nights out in the cold, exposed to the elements, Blossom was in pretty good shape. Lange said she had skinned her nose a little bit, her ears were full of dirt and that she had a little limp in her right rear leg that the vet gave her medicine for.

Now that Lange has recovered his dog, his worries have washed away and he can finally relax and enjoy his time in Nashua visiting his sister, who he said he has not seen since 2000. He will be in the area for another few days before he and Blossom load back into his pick-up and venture back home to Iowa. In March, Blossom will celebrate her second birthday.