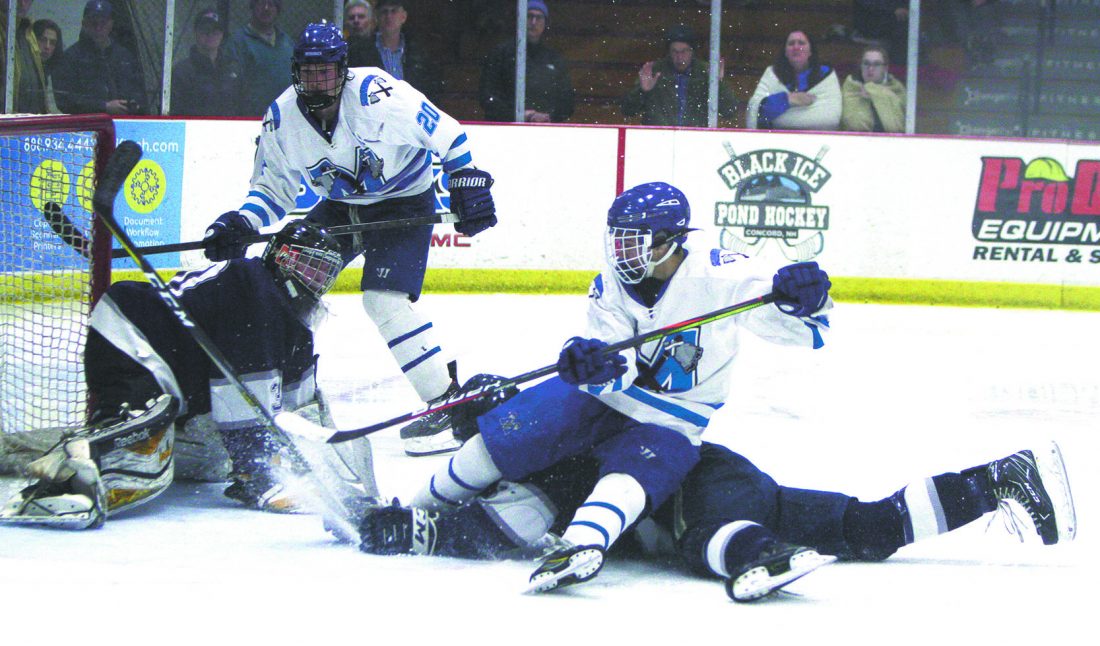 Telegraph photo by HECTOR LONGO Merrimack's Dom Carozza takes the pass from Zach Stimeling and gets tackled from behind, drawing a penalty in the second period against Saint Thomas. Two minutes later, Carozza got Merrimack on the board with the first Tomahawks goal of the night.

CONCORD – By general rule, the deeper you trudge into the state tournament, the greater significance taken on by the first goal of the night.

Chasing on the scoreboard nearly the entire night here in the Division II state semifinals, No. 2 Merrimack High got its usual slew of chances but just couldn’t ever climb out of the hole, falling, 3-2, to No. 3 Saint Thomas of Dover.

The Tomahawks were denied in the final four for the second straight year, closing out 2020 at 14-5-1.

“It doesn’t (get easier),” said Merrimack coach Dan Belliveau about losing in the semis for the second straight time. “What else are you going to say about that. We were looking to get that monkey off our back. And we will. Next year, as they say.”

The Saints, who took the regular season meeting between the teams 3-1, broke to a 1-0 lead just three minutes in on a flukey Brendan Chrisom goal that Merrimack netminder Ben Hardy just didn’t see.

“The first period is the period we wish we had back,” said Belliveau. “I don’t think we had our best first period of the season. And we couldn’t recover from that.”

Hardy and the Tomahawks found their game there, and the fight was on.

Still, it moved to 2-0 in the second when Saint Jack Karwowski found himself alone in front of Hardy, who had no chance.

“Being down by two goals, we’re never worried because of all the talent we have,” said Belliveau. “We had a feeling we were going to come back. We had pressure on. Their goalie played outstanding.”

With 4:28 left in the second, with the Merrimack first line beginning to impose its will, Dom Carozza came up with a steal on the forecheck with help from Evan Roy, spun with a tight turn and fired a wrist shot just under the cross bar to beat goalie Britton Dunbar and break the ice, slicing the margin to 2-1.

As impressive as that shift was Carozza, Roy and Zach Stimeling were better the next time out, spent totally in the the Saints’ end.

But all that energy and momentum seemed to evaporate as rapidly as it was conjured.

Saint Thomas defenseman Luke Grella was the culprit in the final minute of the second as his 40-footer ripped off of Hardy’s arm and in, giving Saint Thomas its two-goal lead back, 3-1, heading to the third.

Things got even more interesting in the third when a courageous Carozza charge forced a Saints’ tripping call.

On the power-play, Stimeling sent Evan Roy away on a speed rush through the Saints’ defense and Roy schooled Dunbar, again slashing the margin in half.

From there on out, every time that line took the ice it caused nothing but panic in the Saints’ zone.

The final four minutes were wild.

Merrimack drew a penalty and barraged the Saints’ cage.

Dunbar wouldn’t budge, though. He found a way to keep the puck out and deny the Tomahawks, who outshot Saint Thomas, 31-28, a chance at overtime.

“We’ve got the talent on this team. We had a lot of guys score a lot of goals this year. We were putting the pressure on,” said Belliveau. “I believe we outplayed them in the second and third periods. You’ve got to hand it to Saint Thomas. And that goalie had probably the game of his life. He pretty much shut us down.”