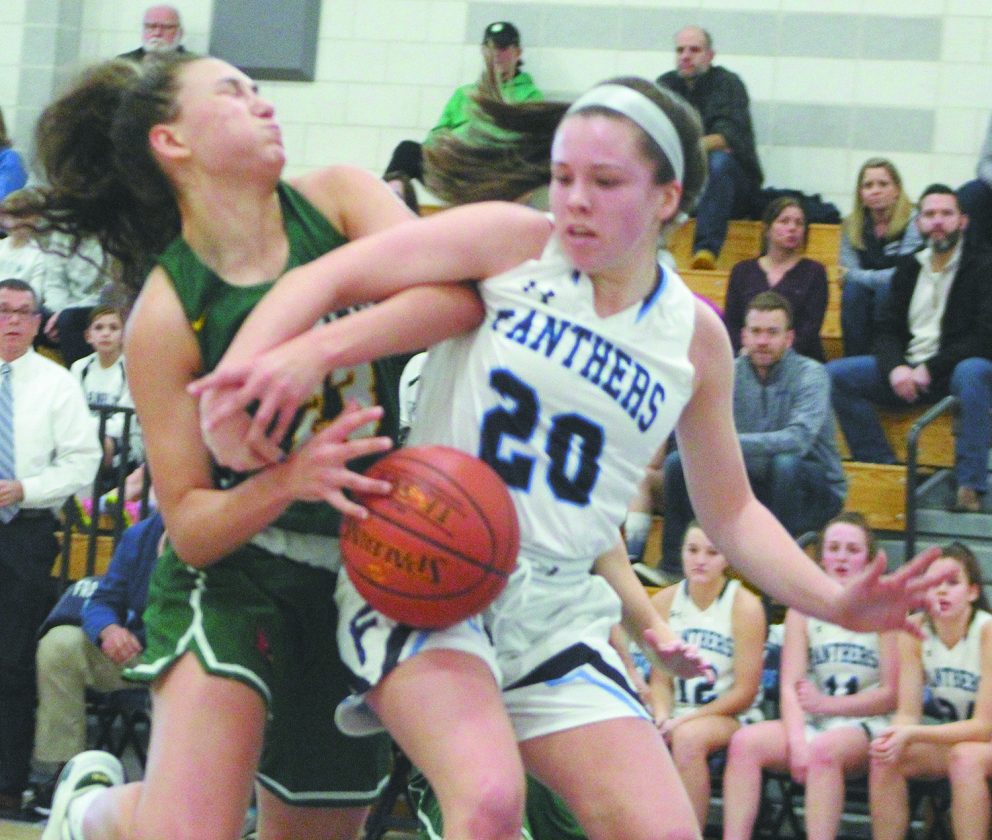 Telegraph photo by TOM KING Bishop Guertin's Bri Wilcox is fouled on her way to the hoop by Franklin's Erin Quaile during the host Panthers' 47-46 win Thursday.

FRANKLIN, Mass. – One possession, one point.

“That’s a really good team, and they made everything hard for us,” Cards coach Brad Kreick said. “I’m happy we had a game like this at this time of the year. It’s a one-point loss, and that’s not a great thing, but that’s a heckuva good basketball team and we went toe-to-toe with them the whole game.

That play was a drive to the hoop by Guertin’s leading scorer, Bri Wilcox, who had 17 points, after the Cards inbounded the ball down one with 7.2 seconds left. But Wilcox tripped and stumbled, turned the ball over, and that was that. The Panthers (21-0) had taken the lead on a clutch corner jumper by sophomore Olivia Quinn with 14 seconds to play.

“Olivia’s a tough player, she’s come so far in a year-and-a-half with us,” Franklin coach John Leighton said. “Tough as nails down the end. But give Bishop Guertin credit, they played great ‘D’. High pressure. That’s why we really wanted to play this game. Great for both programs.”

The game was certainly winnable Earlier, Guertin’s Addison Smith had barely missed a layup with just under a minute to go that would have given the Cards a three-point lead. It was that kind of narrow margin.

But statistically, the game was lost by the Cards at the foul line. Guertin went a tough 3 for 11 from the line while the Panthers, who were led by 6-4 senior Ali Brigham’s 19 points, were 8 of 12.

The Cards trailed 13-10 after the first quarter, but then went on an 11-0 run with their transition game to grab a 19-13 lead and held a slight 23-21 edge at the half. After three, it was fittingly all knotted at 34 as Guertin just couldn’t pull away.

“In the second half we got better offensive looks with stopped their fast break,” Leighton said, adding he wanted to get his team into a half court offense “where our height and our defensive pressure would help us. I thought it was our defense that made the difference at the end.”

Guertin also got 13 points from Erin Carney, but for most of the game missed guard Hannah Muchemore, who came up lame on a layup attempt in the first quarter and left the game. Kreick said if it was a state title game, she likely couldn’ve returned.

The Cards also struggled in a few moments with the 30-second shot clock, which Massachusetts has by rule and New Hampshire does not. Guertin likely would have tried to run out the clock in the final minute had their been no clock.

“Sure, that’s what we would normally do without a shot clock,” Kreick said. “But I’ve always been a big fan of the shot clock, no excuses about the shot clock. We actually got a good look in that (next to) last possession. The ball just didn’t go down.”

Quinn finished with 10 points, while Franklin teammate Elisabeth Wilson had 11.

“I can’t criticize much,” said Kreick, whose team hosts Portsmouth on Monday in a rematch of last year’s Division I finals. “I thought the kids played their tails off. …

“You never want to lose a game, but I think we’re a better team than we were two hours ago, and this is going to help us in the state tournament.”