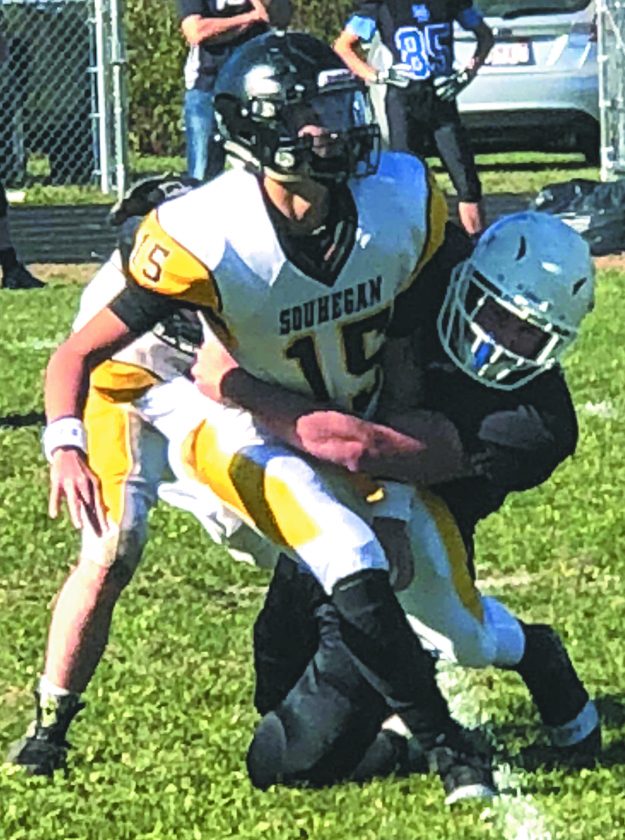 HOLLIS – The Hollis Brookline football squad faced an absolutely massive test against the Souhegan Sabers on its home field on Saturday. And it was a test which the Cavaliers passed with flashing neon

Cavs’ coach Chris Lones had warned his players after their 50-0 blowout of woeful Sanborn in Kingston a week earlier that their mettle would be tested heavily in their final three regular season contests of 2019 against Souhegan, Alvirne, and Saint Thomas.

And if they are to advance to the Division II playoffs it will be because of their performances in that trying trio of contests.

Despite a few slight slips here and there, the Cavaliers were considerably better than the visiting Souhegan squad on Saturday in test number one. And as a result the hosts strode ceremoniously away from their field with a 27-7 victory about which they could boast with pride.

The now 4-2 Cavs scored all of the 20 points tallied in the first half to roll into halftime with a reasonably solid lead. And despite Souhegan’s glittering start to the second half, Hollis Brookline drove its way to a victory which left coach Lones, his assistants, and their players wearing wide grins which they’d certainly earned.

“We’re still in the playoff hunt, very much in the playoff hunt, and this win was huge,” said Lones. “We told the kids that this is one of those games where you need to prove that you are the team you thought you could be at the beginning of the season. And they came out and did that.”

For the now 4-3 Sabers, it was a wrenching, emotional, and disappointing game which included the loss of a key player to injury and some lackluster play and costly mistakes.

The game was held up for approximately a half hour during the middle of the second quarter when Souhegan junior standout Reese Colby suffered an injury which required that an ambulance be called to have emergency medical people assess and remove him, gingerly, from the field by stretcher. And while that was gong on, a member of Colby’s family collapsed and had to be attended to by another set of EMT’s perhaps 40 yards away (see related story).

Sabers’ coach Robin Bowkett and his assistants then had to try to refocus their players after they had watched and worried about their injured teammate and what had happened on the other side of the nearby fence to that teammate’s family member.

All in all, it was something of a nightmare situation for the Souhegan community members in attendance.

“Believe it or not this all happened a year to the day after we had a player break his leg against Manchester West and have to be taken away by ambulance,” said coach Bowkett. “The kids kept battling, but before Colby went down we made some key mistakes and had some self-inflicted wounds that really hurt.”

The Sabers had stepped into Saturday play looking to wipe away any remaining frustrations lingering in the wake of their recent 21-20 home defeat at the hands of the Pelham Pythons. Souhegan, which began the afternoon with a 4-2 overall record and having suffered its two defeats – to Alvirne and Pelham – by one slim point in both cases, was stepping onto the home grid of a Hollis Brookline bunch which moved to 3-2 by absolutely hammering the weak Sanborn squad.

Souhegan’s first offensive series of the Hollis Brookline game looked all kinds of good until the Sabers got to the Hollis 13 and a bad snap cost them a huge 15 yard loss. And on the very next play Cavs’ two-way star Sander Wimmer intercepted a pass to give his offense the ball.

However, just three plays later the Cavaliers fumbled the ball back to their opponents on the Hollis 22, and the Sabers were back to seeking the first points of the day.

But they wouldn’t get them as Hollis dug in on defense and took over on downs.

However, the first points weren’t scored until 6:27 remained in the second period and the Cavs capped off a seven play drive with a 31-yard pass connection from Sander Wimmer to his brother Quinten. The two-point conversion try failed, but the hosts held a 6-0 advantage.

Reese Colby then suffered his injury – believed to be a broken collarbone – while going out of bounds on the Souhegan sideline on the ensuing kickoff. And the teams were left standing around anxiously for the next half-hour or so.

Shortly after play resumed, the host Cavaliers bounced their lead up to 13-0 when a 10-play drive was capped off by a 1-yard scoring push by Sander Wimmer with 1:53 remaining in the half. Andy Basque was on target with the point-after kick.

The Cavs’ defense then got its side a 20-0 lead less than a minute later when defensive back Blake Bergeson picked off a pass and raced 60 yards in the opposite direction to pay-dirt. And 20-0 was where the score stood when the two teams adjourned for halftime, with the reeling Sabers intent on trying to right themselves.

As the second half commenced it looked as though Souhegan might have done just that as an excellent kickoff return followed by a 26-yard scoring sprint by Luke Manning put the Sabers on the board. And the PAT by Riley Lawhorn made the score 20-7.

However, Souhegan would get no closer to a comeback as the home-standing Cavs had the final word on scoring a mere 17 seconds after the Saber celebration concluded. The hosts needed just one play – a 60-yard romp by Marc-Andre Thermitus – and the subsequent PAT to go up 27-7 with 11:26 left in quarter three.

That would be it on the scoring, with victorious Hollis having collected its 27 points on 310 total offensive yards, including 141 through the air from Sander Wimmer on 15-for-19 passing. Thermitus led his squad to 169 rushing yards by tallying 109 of his own on eight carries.

The Sabers finished up with 261 offensive yards – 211 through the passing game – with signal-callers Austin Jain and Manning hurling the ball skyward some 32 times with 20 completions.