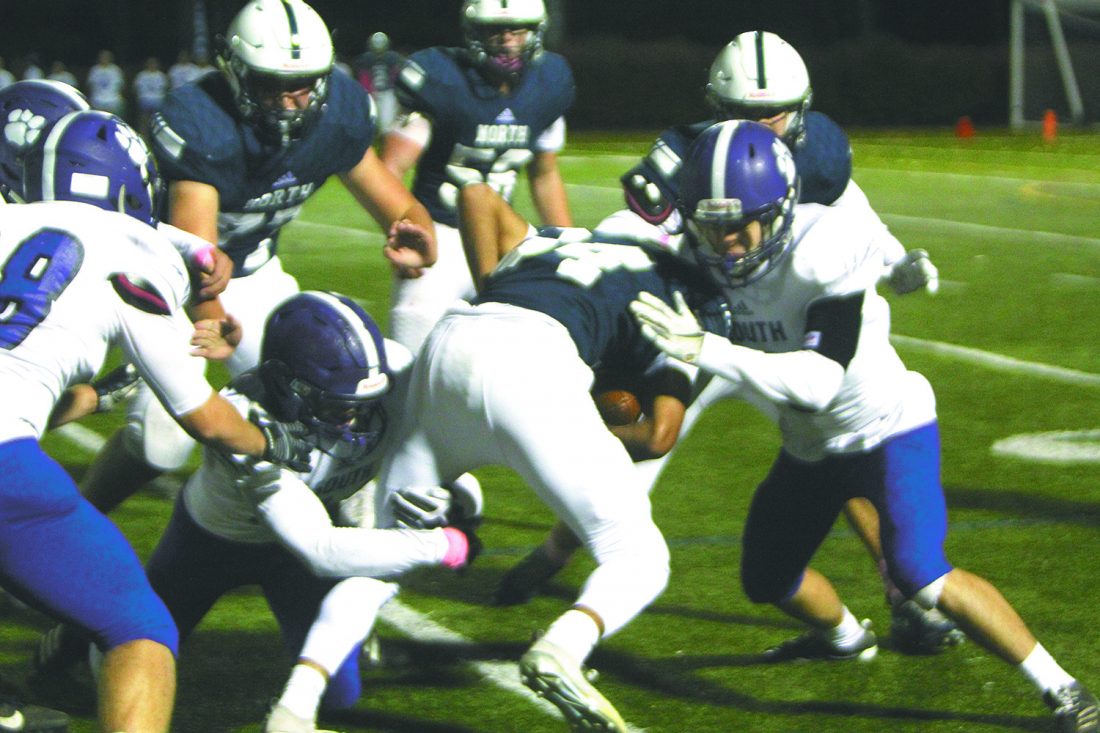 This past weekend just intensified the race for local high school football teams in the West Conference.

Nashua North sits atop the standings at 5-0 after a 21-6 win over Nashua South, but what about the rest of the West?

It’s a jumble, with Nashua South, Bishop Guertin and Merrimack all knotted at 3-2 after Merrimack left Stellos Stadium late Saturday night with a 35-19 win over Bishop Guertin.

“It muddies up this conference quite a bit,” said Cards coach John Trisciani, whose team has another big conference game with North on Friday night. “All of a sudden, at 3-1, we thought we were sitting pretty. … It’s definitely a bunch of teams in the mix. We’ll see, it’s a long season.”

Saturday’s game was a must win for the the Tomahawks, and with Keene coming up at home, they’ll be favored to move to 4-2.

“I think we were suffering a crisis of confidence more than anything else,” Merrimack coach Kip Jackson said. “After you lose a couple of games, you need to make sure you start to do things the right way and hope things work out so you can get a ‘W.’ ”

Speaking of W’s, did North coach Dante Laurendi ever think his team would be

“You don’t ever look,” Laurendi said. “I kind of never really look ahead. We knew every week was going to be a battle, year in, year out you just never know. You go four or five weeks into the season and you’re still trying to find out who you are, who other teams are. I think as we get into the meat of it, we know South is a tough football team, a very physical football team.”

Panthers QB Mike Rutstein got shaken up toward the end of Friday’s game, and there was a wait-and-see how he would be after.

But in the meantime, junior Chris Keefe stepped in late and was impressive running the ball. Keefe has been a big part of the Panther offense as a receiver anyway.

“We know we can do that,” Knight said. “We’ll see what happens.”

The Panthers know they can bounce back.

“We’re still a work in progress,” Knight said. “But we’re a better team than we were three weeks ago, I’ll say that. But not at that championship caliber right yet.”

If the Titans go on to bigger and better things, they’ll remember their goal line stand to start the game, thwarting Nashua South at the end of an epic 17-play drive.

And then two plays later North scores on a Curtis Harris 73-yard run.

“That was a big stop for us and a momentum changer,” Laurendi said. “That was a 14 point swing. …We needed it because they pushed us around all night. … We’d prefer not to give up seven minute drives. We don’t want to be on the field that long defensively.”

But defensively, the Titans had junior linebacker Spencer Whiting. All he did was lead them in tackles and was all over the field.

“Spencer’s a tough kid, he’s an iron man for us,” Laurendi said. “He goes both ways, doesn’t come off the field. He’s a workhorse. Fortunately for us he’s in great shape. He’s a very smart kid, started as a sophomore and has a good understanding of what Coach (defensive coordinator Kyle) Tave wants defensively. The old cliché of having another coach on the field. That’s what it’s like.”

The Titans also got a good running game from Anthony Green.

“Anthony runs hard,” Laurendi said. “He’s really running with some confidence, running hard. He moved the chains for us a couple of times late in the game when we needed to. Curtis (Harris) is the guy everybody talks about but we have some great role players who are doing some really key things for us.”

The Cardinals had tough time physically with the Tomahawks, and there’s some walking wounded to deal with.

They had just gotten junior defensive back Brendan Callahan back from injury for the first time this season and he got shaken up. They also had stalwart defender Jacob Scholefield go out with a knee issue. Lineman Mike Terrazzano had a bad ankle, and that’s just for starters.

“Depth’s always an issue,” Trisciani said. “Ultimately we had a couple of more kids go down. … “Depth is tough.”

Callahan was, though, a bright spot for the Cards with two interceptions and he also played a role on offense as a receiver.

“He hadn’t played a game for us this year, and with a couple of interceptions, he had a big impact on the game,” Trisciani said. “He helped us slow (Merrimack) down on their first half drives.”

The Tomahawks the last few years have always had a new wrinkle at quarterback. Saturday night they used sophomore Kyle Crampton along with regular starter James Dowling.

“It was new (Saturday night) more than anything else,” Jackson said. “It allows us to get another athlete in space with James, and gives some other kids a break on offense.”

The ‘Hawks liked the look with Dowling as a runner at times, and he also has been a key on defense. He ran eight times for 49 yards the other night.

“He’s a physical kid,” Jackson said. “We thought we’d be able to utilize him more as a runner as well as on defense. This is the most defense he’s played since he’s been on varsity.”

But Jackson loves having two quarterbacks in a game.

“Yeah, we do, it gives you a lot of flexibility,” Jackson said. “Coach Laurendi used to do that a lot when he was at North (as the offensive coordinator) with Coach (former head coach Jason) Robie.”

Surrendering 43 points, even in a win, would most often turn a defensive coordinator’s hair gray instantly.

Friday night’s Sabers’ win over Milford has to b the exception to the rule.

Milford had an interception return for one score by J.R. Ughu and a Gavin Urda fumble return for another. Two others were set up by Souhegan special teams miscues.

“Our defense and energy was so good, trying to pick up one another,” said Souhegan linebacker Mike Maroun. “Overcoming adversity was huge. When things started to go wrong, we were staying physical.

“I don’t think it was one specific person we focused on stopping. We followed our jobs. Being physical was huge. We were playing like dogs. Milford has talented players, but our defense never gave up. We were ready to go. We came off the bus ready to hit, ready to play.”

Milford ran 52 plays on the night and had just 278 yards of offense, total.

Souhegan halfback Riley Lawhorn nearly had that by himself with 11 carries for 264 yards (3 TDs) rushing.

Lawhorn deservedly spent the weekend resting his tired muscles after logging all that mileage.

“I definitely was tired, but I took it easy, rested up and iced. It’s been great,” said Lawhorn.

Nearly every Lawhorn yard came on the counter play inside.

“I followed my lead guard, Alex Karpawich, and all five guys up front were amazing all night long,” said Lawhorn. “They weren’t as big as the Milford guys but they played tough.”

Souhegan certainly played like a team that was desperate, coming off the loss to Alvirne.

There was also the matter of Milford taking the victory in this grudge match a year ago.

“It’s something we’ve been looking forward to all season,” said Maroun.