North-South to battle for more than just a bridge 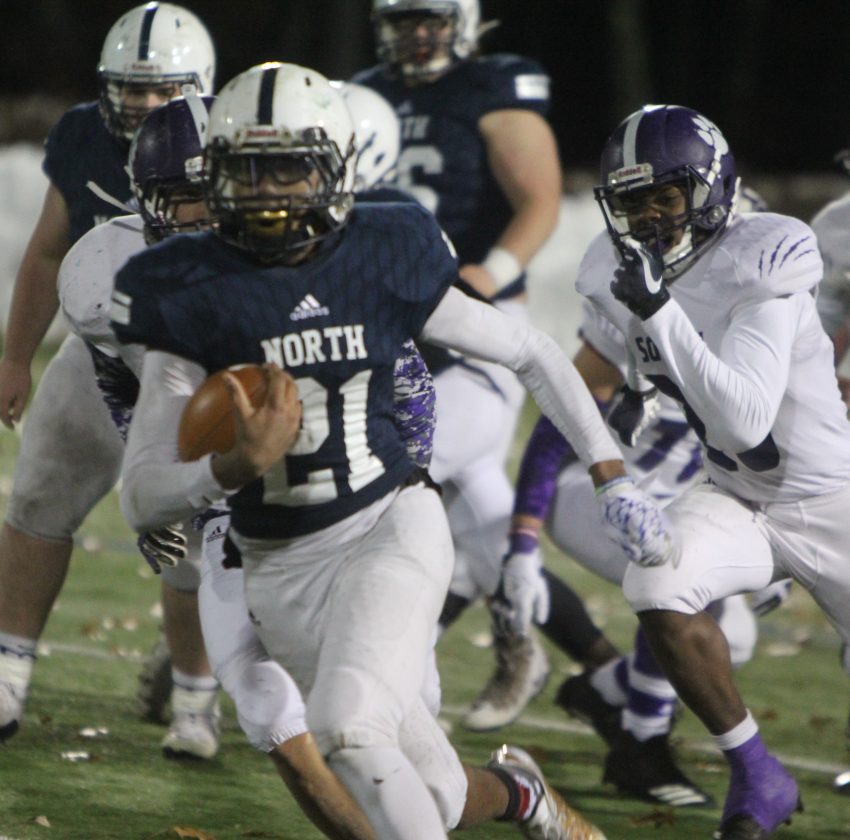 Telegraph file photo by TOM KING Nashua North's Curtis Harris will be a huge key to Friday night's Battle of the Bridge vs. Nashua South.

NASHUA – They basically have fit right into the theme of the Battle of the Bridge.

They played together in youth football on the Nashua Elks Crusaders. But now competing high school juniors, they’ll lead their respective teams into Friday night’s Battle of the Bridge at 6:30 at Stellos Stadium.

It’s a West Conference game that with the Titans at 4-0 and the Panthers at 3-1 is more than just a clash of rivals. It’s a game for potential post-season qualifying and positioning. South leads the overall series 20-11, 9-6 in the regular season.

Compoh has battled through ankle and other injuries and returned last Friday with a bang as he rushed for 210 yards and three TDs in a win over Merrimack. Harris had 160 and three scores in the Titans’ dramatic win over Exeter.

Two friends, but no trash talking. Compoh says they’re both not into that.

“We have that little mental thing where we want to be extra competitive with each other,” Compoh said, adding that what Harris has done the last season plus this fall “helps me be competitive, trying to keep up with everyone, especially since he was right next to me during (Pop Warner Elks) Crusaders and I see him doing big things.”

They both plan on doing big things in a big game. In their last meeting, last Thanksgiving Eve’s 52-26 South win, Harris was held to 76 yards on nine carries but did toss a 72 yard TD pass. Compoh, meanwhile, had a 15-yard TD reception and two-point conversion run, just emerging. When healthy, he’s a bigger part of the offense now.

Thus, expect much more from both this time, but the game is oh, so big. North won the regular season meeting last year in Week 5, 21-14, and it helped propel them to a playoff berth.

“People want to make it the rivalry game,” North coach Dante Laurendi said. “But more important than the rivalry, it’s a conference game, that’s key for standings. The way everybody’s been battling one another so far, that makes it more important.”

North has beaten four seacoast teams and now it’s time to play in conference. They suffered a tough loss in back Xavier Provost (knee), but have other players like Anthony Greene, Jayden Espinal, etc. to try to take the spotlight off Harris.

“It’s big, we’ve known that,” Laurendi said. “We’ve been fortunate we’ve had guys who have contributed. … It’s all hands on deck. This is another one of the opportunities for one of the other guys to step up and play big for us.”

The Panthers were down after being shut out by Bishop Guertin three weeks ago. Since then they’ve scored a total of 100 points, signfying the fact they’ve come a long way since then.

“Pretty far,” Knight said. “We’re starting to settle into jobs. We got (linebacker/receiver Connor) Rowsell back and Jason Compoh back and it definitely gives us more depth. … Guys want to get on the field and they’re playing hard.”

“Like anyone else, you don’t look your best in Week 1 or Week 2,” Laurendi said. “They’ve put it together pretty quickly.”

South has had to groom sophomore Mike Rutstein into the QB position while last year’s starter, Dante Young, suffered a facial injury during the summer. Rutstein has played well.

“I think he’s been pretty steady,” Knight said. “We didn’t do a good job of protecting him early and we’ve gotten a little bit better over the last couple of weeks. He’s got a pretty good understanding of what we want him to do, and we’re trying not to put too much on him.”

“They fly around on defense, they’re pretty good, they’ve got a real special player over there (in Harris),” he said of the Titans. “They’ve got some other kids who are pretty good, too. We’re going to have to have our eyes in the right places and play downhill.”

Knight said there won’t be any special defense devised to stop Harris.

“We’ll just try to play good sound defense, and obviously we have to keep an eye on him,” he said. “You can’t give him lanes to run. It’s like you’re playing against a Wildcat team.”

Senior linebacker Charlie Collins has been the Panthers’ leading graded defender, and senior linebacker Kyle O’Connor plus senior defensive end Braden McDonnell, plus Josh and Jason Compoh have played well defensively. Jake Smith has helped a secondary that has six intereceptions, and the defense has nine turnovers overall.

North’s defense has to, in Laurendi’s mind, “has to rally to the ball and team tackle.” Linebackers Justin Edwards, Spencer Whiting, and Devin Bracetty have played well, plus Espinal at defensive back, and, yes, Harris. It’s truly a team defnse concept.

Laurendi has always tried to make sure his players stay focused for this one, especially the regular season contest.

“A lot of these guys are friends, been going to school together for a long time and like competing against each other,” Laurendi said. “We’ve got to kind of be able to take that out of the equation, just go play football regardless of trying to one up your best buddy you went to school with through the eighth grade.”

But that’s hard to do. Harris, though, has been able to do it.

“He’s a kid who has been playing varsity in multiple sports since he was a freshman,” Laurendi said. “That gives him experience, helps him out, and I think he has the ability to stay focused on the big picture and not do too much.”

Still, it’s tough to stay level headed. Laurendi is impressed with the older Compoh’s ability, both on offense and defense.

“I think he’s excellent,” he said. “It’s great to see a kid like that succeed for somebody who does all the right things.”

“It’s probably the most exciting game I’ve ever played in my career pretty much,” Compoh said. “It’s the most important game I’ll ever play so far.” 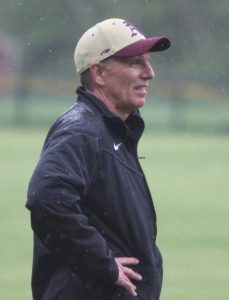