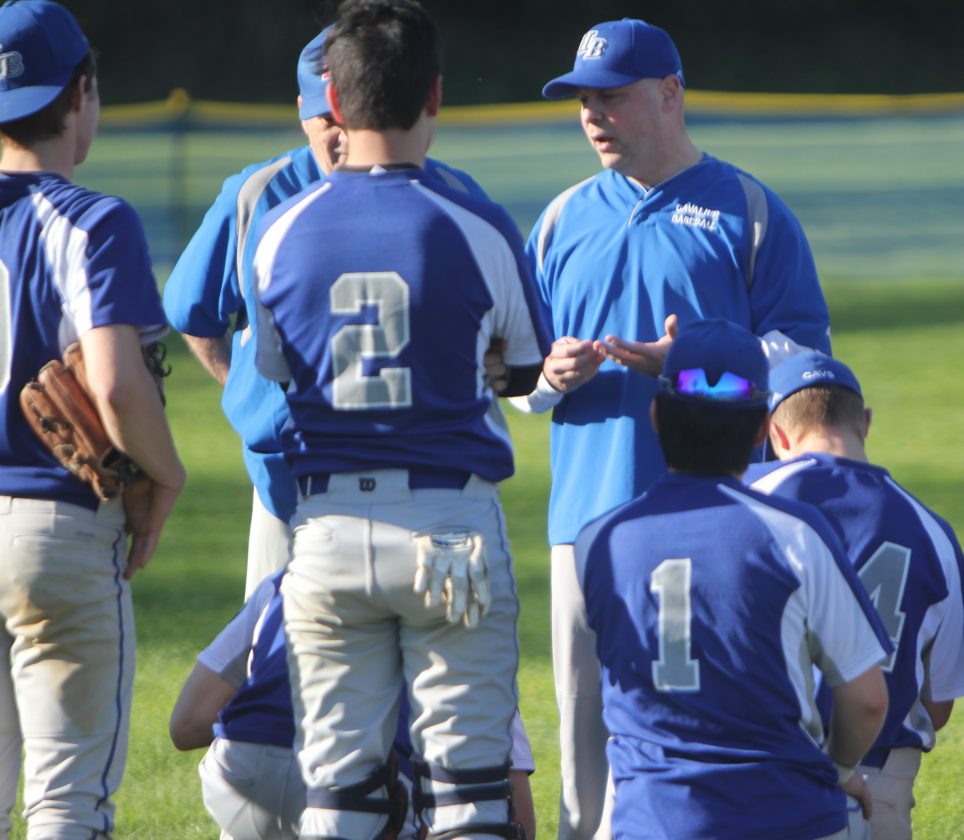 Telegraph photo by TOM KING Hollis Brookline High school baseball coach Jay Sartell has his team buying into his philosophy in his first year running the program after years coaching in the system.

HOLLIS – If you’re around Hollis Brookline High School and don’t know who Jay Sartell is, well, you haven’t been paying attention over the years.

Not only has he been a fixture in the baseball program but also as a Hollis policeman and eventually police chief.

And another reason you should know the first year Hollis Brookline head varsity baseball coach is he’s all about relationshps. And the fact he’s coached the game in town for several years with youth programs and the Cavaliers’ sub-varsity.

“I think the key is making the relationships and making them authentic,” he said. “It’s hard if you’re walking one thing and talking another thing. That doesn’t work. Sometimes you have edge to it along if it doesn’t go your way.”

Right now, it’s going the Cavs’ way and then some, as they stood at 11-1 after Tuesday’s 13-3 win over Manchester West at Gill Stadium.

He’s so well known in town, most of the players on this year’s varsity had played for him before at one level or another.

“Even playing for him as a JV player, he brings the team together,” Kyle Hsu, one of three Cavalier seniors, said. “He doesn’t take anything that shouldn’t be going on. Players want to play for him, they rally behind him. That’s what this team is doing.”

“It’s been a lot of fun, I like it, I like the boys, like I’ve said, I coached a lot of them for a lot of years, so I was happy to get the opportunity,” Sartell said. “It’s a good group of boys to be around, they’re very academic, very school-centric.

He has 25 years in law enforcment, and spent the better part of 20 years on the force in Hollis but also was chief for the last seven. He’s nowthe deputy chief in Townsend, Mass., but while here he spent a lot of time around the school as the town’s unofficial school resource officer.

“It provides me a level of knowledge, though, about the boys and their backgrounds, and who they are,” Sartell said, “that the average person, average coach doesn’t get. It also gives me an idea of what the community’s feeling is like; what it likes, what it needs. This is what you find for our young men in this community. They’re fine young men, and it’s good to stay grounded and know that as a police officer. I highly encourage coaching and youth involvement for anybody (in law enforcement) working the road.”

Sartell takes something else from his

his career in law enforcement to the diamond – a sense of immediacy.

“Honestly, it’s what’s important now,” he said. “If you spend time looking in the rear view mirror, you miss what’s coming up and you crash your car.

“That translates well but I think the other thing is it’s more than baseball. It’s more than about baseball. It’s translating those skills into the work place, skills into you’re relationships with people, being disciplined, understanding what’s important in life, working hard and watching it pay off. That’s what I take out of it.”

He’s coached in Manchester, he’s coached in youth baseball at various levels here. And once he became the head coach this past year, the fit was natural. Still, he took over a program that has been frustrated with a string of consecutive non-tourney seasons, and two years of losing close ball games, games they’re winning now.

“Positive energy and what’s important now makes a difference to me and I think that is what I found with this team. That’s the information I think they really needed and have put into action. We see it; they can grind it out out, because they don’t get negative. They don’t spend time thinking about the error or thinking about the blown inning.”

Sartell will point out to his players where an inning could have gone, either for the good or the bad, but didn’t. And there’s something else he’ll be quick to act on.

“Correcting a negative behavior when you see it, even when it (produces) a positive result,” he said. “That’s a key that we often miss as coaches, and I know I miss it as a manager in the real world. Just because something ended up right doesn’t mean you went about it the right way. And I will send that message and provide that kind of feedback when it’s necessary.”

Sartell knows that constructive criticism is still hard to get young players to accept.

“It’s always eclectic,” Sartell said. “One of the reasons I always like to stay in a team environment is you can never recreate a team twice. Even the same 15 kids come back the next season, they’re different kids. It’s a differenty dynamic. It’s hard to say from what season works and doesn’t work.”

But Jay Sartell isn’t thinking of that right now, as he’s got his team playing in the moment. And those who know him understand that’s what he’s all about – and so are his teams.

Besides baseball with all the pitch count limitations, the other sport that is under the gun for a glut of events is boys and girls tennis. Remember, the regular season is done this week with the tournament set to start next week, the boys quarters on Tuesday and the girls on Wednesday.

It looks as if the long awaited Bedford at Bishop Guertin girls regular season tennis match – a rematch of last year’s finals, which was rained out last Friday – should be made up sometime this weekend, possibly as late as Sunday, the last day to possibly play.

The Cards likely won’t do anything the first part of Saturday as the BG junior prom is Friday night,

The Cards didn’t want to forego the regular season without a look at the Bulldogs, especially since they don’t play the other unbeaten, Derryfield. The Cougars and Bulldogs were scheduled to meet Tuesday.

“Exactly,” Cards coach Barry Ndinya said, adding that if any other matches are postponed they may have to be made up on Sunday.

Another key girls match will be Friday with Nashua South hosting Derryfield, the Panthers still seeking that signature win. They don’t have Bedford on the schedule, and the Cards don’t have Derryfield.

Sundays normally are quiet high school days but already there are a handful of postponed games on the schedule, including Merrimack at Hollis Brookline boys lacrosse plus Bishop Brady at Campbell baseball/softball. Stay tuned, there could be more.

One possible side effect of Bishop Guertin’s easy 16-7 win over Exeter is the mental approach to a possible semifinal rematch which would be at Exeter’s Bill Ball Stadium in a few weeks.

“It’s so jumbled up between 2, 4, 5 and 6 this year, that we could see them in the semis at Exeter,” Guertin coach Chris Cameron said. “You’re beating a team 13-0, our kids aren’t going to take them as seriously as we should. That’s not a team I want to see in the semis in their place.”

Alvirne is still seeking its girls varsity soccer coach to relieve principal Steve Beals of that extra duty, which he undertook last fall.

Also for the winter, as was reported, the boys varsity hockey job is open as as well as an assistant’s job.

For more info and the on-line application process, go to  https://www.applitrack.com/sau81/onlineapp/default.aspx?all=1  or email athletic director Karen Bonney at kbonney@sau81.org