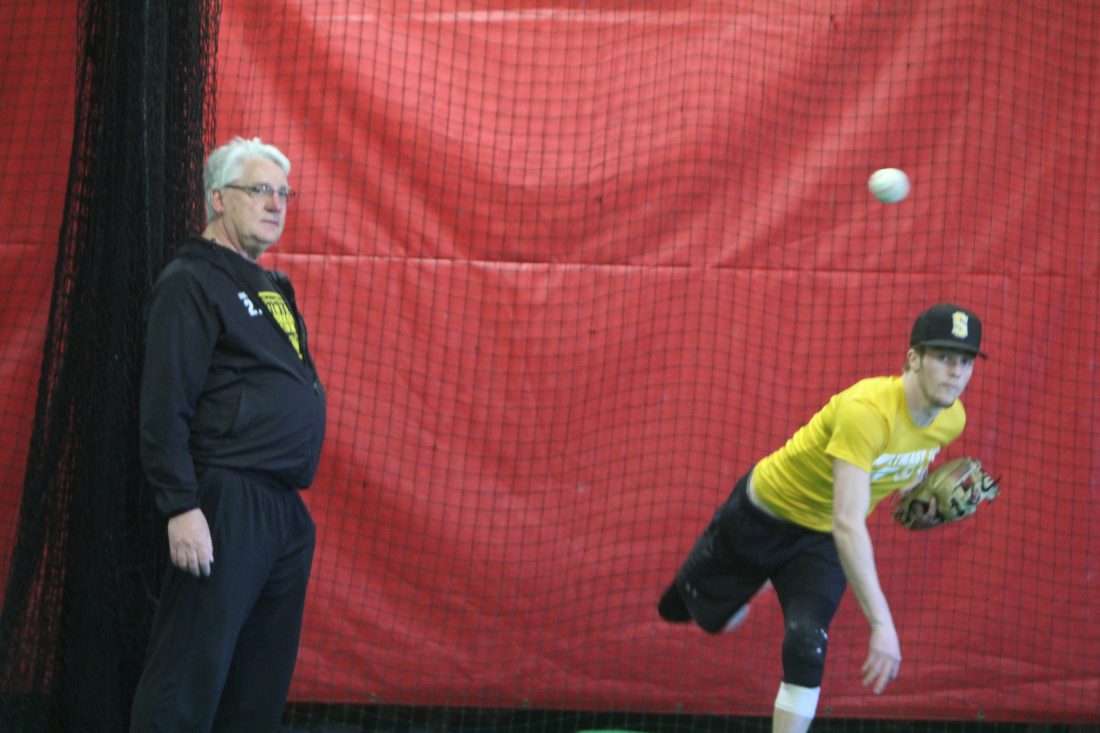 It was probably in early to mid-May when then-Souhegan High School head baseball coach Bill Dod sat down in a meeting with trusted assistants Tom Walker and Mike Beliveau.

He wanted either of them to take over the program for the future as Dod had already announced that his 50-year coaching career was coming to a close, and the only baseball coach Souhegan had ever known would be retiring.

Given his 27-plus years at Souhegan, it was pretty much known that Dod would have a huge say in who succeeded him. So he asked both if they were interested.

Walker deferred to Belliveau, saying he’d be glad to continue on as his assistant. “But Mike didn’t want the head job, and said he’d put his weight behind me as Bill’s successor.

“It was a tough meeting. But I think Mike and I, knowing each other, knew we both had a good baseball mind and the program would be in good hands. Mike’s staying on the staff, and the continuity is key.”

And the groundwork for the line of succession for Souhegan baseball was set down. Walker eventually met in late October with new Saber athletic director Dan Wyborney and school officials, and all it took was a couple of hours to anoint him as the new Sabers head coach. Walker said it was a “tremendous” meeting, and there was “a lot of synergy with what I wanted as far as administrative backing and what they wanted out of the coach and the players.”

Three or four days later, a new Souhegan baseball coach was in place.

“I think the boys had an idea I was in line to get the job,” said Walker, who has had a couple of parent meetings already and had a good turnout for off-season winter workouts. “I think everybody has kind of grasped what we’ve wanted to do going forward.

“It’s going to be a smooth transition. I’ll won’t be that much different than Bill, but I’ll have my own style. But I think fundamentally we believe in the same thing.”

The players are making the adjustment.

“So far, so good,” pitcher Jacob Grassett said. “I think it’s a big plus for the program, having a familiar face. Returning kids already know him, what his style is, and what he’s like.”

Walker has known and coached with or against all the longtime area youth coaching legends, including the late Jim Sanderson. He was the president of Cal Ripken baseball in the town of Brookline, and he was an assistant for a few years at Hollis Brookline High School before longtime coach Ryan Coulter, who has since moved out west, was let go. Walker applied for the Cavs head job but didn’t get it. When Dod heard his old rival at the Senior Babe Ruth level – Walker had coached Hollis Brookline Dodgers – was available, he invited him to join the Saber staff.

“I jumped at the opportunity,” Walker said. “I knew Mike Beliveau, having played against him in some men’s leagues. So I had a history with him, too.”

Thus Walker, who primarily has worked with the pitchers, was a good fit.

“He allowed sharing and dialogue, but he ultimately made the final call. It was great.”

Walker certainly feels the enormity of taking over for a coaching legend. But being an inside job makes a difference.

“If I had come in from the outside, and not had any real engagment with any of the players or with Bill, I’d feel much more pressure than I do now,” he said. “I’m very very comfortable.”

His philosophy? “Solid fundamentals, and a mental approach to be prepared day-in, day-out,” Walker said. “And in baseball terms, put things behind us, good, bad or indifferent. We like to build on momentum.

Walker soaked up a lot of knowledge from Dod, seeing what he did with his players. “I want to embrace the kids, get them through this high school transitional time,” he said. “I think Bill always had a compassion and a caring for his student athletes.

“I think that’s the thing I took from him. There wasn’t a day he didn’t come to practice when he didn’t care about them as a student, as a person,as a student and as an athlete. Which I’m not sure everybody does.”

The players appreciate that.

“I think for the program it’s been an easy transition,especially him knowing Coach Dod for so long,” Grassett said. “Very similar coaching styles and ways of playing the game. Just really good for the program so far.

“There was definitely an idea he’d get it. There was a bit of a sigh of relief knowing he was getting it, just happy that it was him.”

How is Walker different from Dod?

“I don’t know,” Walker said. “I think it will play itself out. I don’t want to be different, because I said in a baseball sense (they’re the same).

“I don’t want to be Bill, and I said that to him before.”

In fact, Walker is so comfortable with the job he wants Dod to continue to be around the team as much as he wants. “I said to him, ‘You are Souhegan baseball. I’m not fearful of you being present. I want Bill to be around as long as he wants to be.

“I want good citizens and good students. I want to promote baseball in the community.”

Which is everything Dod did.

Walker feels there’s great foundation for the program at the Amherst Middle School, inviting seventh and eighth players to the off-season voluntary workouts.

“I want that continuity,” he said. “I want them to see what’s expected and they transition pretty well.”

Walker doesn’t teach at Souhegan; his career outside of baseball is that he’s a senior project manager for an environmental consulting firm out of Boston. As for his baseball career, the Littleton, Mass.native played high school ball there as a pitcher-outfielder. His grandfather, Rusty Yarnell, was the longtime coach (46 years) at Lowell Tech.

He says he hit his stride as a junior-senior, and earned a scholarship to then-Bryant College, playing at the Division II level as a pitcher. And he played men’s league ball since high school. His son, Chris Walker, had a good baseball career at Hollis Brookline.

He made one tough decision, scrapping the annual four or five trip to Florida which mainly was to Bradenton, Fla.to Pittsburgh Pirates spring training. But those were established teams, and Walker felt with just three or so seniors back, a young team needed more hands on work. “The kids were disappointed, but I felt from day one we’re going to work, and I didn’t want anyone thinking just because they were going to Florida that decisions had been made.”

Walker has always wanted to be a high school head coach, and is living the dream.

“This spring, we’ll experiement a little bit, and hopefully, we’ll find our mojo and our groove.”

But most importantly, the Sabers have found their new head coach, who helps remind them of the legend who guided them for so many years.