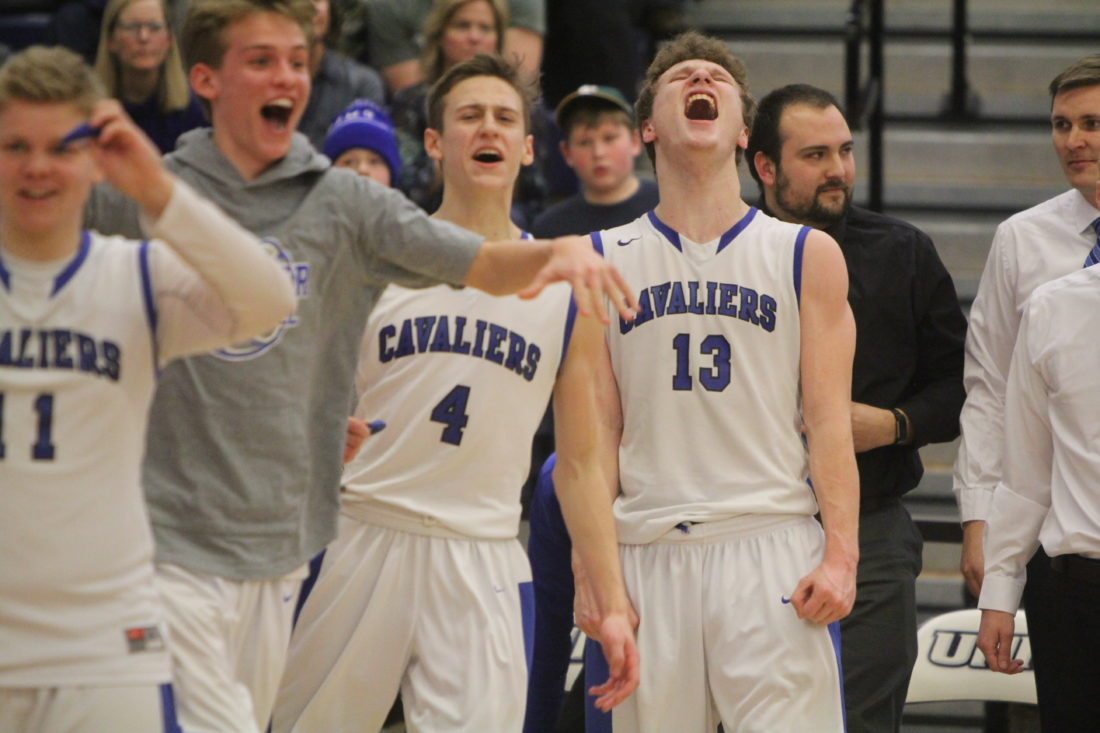 DURHAM – The combination was a championship one for the Hollis Brookline High School boys basketball team.

The Cavaliers’ domination of the boards, and Oyster River’s abysmal outside shooting from 3-point range, added up to a Division II state title for HB, 56-40 on Saturday at the University of New Hampshire’s Lundholm Gym.

It’s the school’s second boys basketball title ever, and it’s now the capital of Divison II, as the girls won this year’s title as well.

“It feels really good,” said Cavs senior Matt Dowling, who had seven points and nine rebounds. “We put in so much work in the off-season, the preseason, everything, it feels so good.”

The No. 1, 19-2 Cavaliers were able to match Oyster River’s known tenacity, and then some.

“Oyster River’s a great team, they played hard for 32 minutes so we had to keep after it,” said HB coach Cole Etten, who took over at the start of the school year after Mike Soucy resigned to take the Merrimack athletic director’s job. “We did a good job beating the pressure tonight, but we got some looks but we were also able to control the pace.

“The big thing for us was beat the press. … Let’s control the pace.”

“The whole year, we knew we were bigger than everybody else, so we knew we’d have to rebound to win,” said HB senior Matt Simco, who had 17 points and an immense 19 rebounds. “And we practiced against the press the whole entire time all week. When they didn’t press us, it allowed us to settle into the game pretty fast.”

And settle they did. The Bobcats were led by Joe Morrell’s 20 points, and he hit a jumper that put his team to within seven, 35-28, with just over a minute to go in the third quarter. But Simco got an offensive rebound and putback at the buzzer, and the Cavs led by nine going into the final quarter.

The lead reached double digits early on in the fourth, and Grant Snyder (12 points) made some key free throws down the stretch to help keep it that way. Jonathan Brackett and Scott VanCoughnett added nine points apiece.

“We wanted to push on everything,” Lucas said. “I think the moment got us early on, and we missed some easy opportunities. We were getting every opportunity I wanted in the first quarter, we just couldn’t finish. And that obviously would’ve made a big difference from thereon out.”

Again, the rebounding helped create the pace the Cavaliers wanted.

“It’s everything,” Simco said. “If they sped us up, we show that we can handle it, but it’s not our game style and doesn’t allow us to get out to the big leads that we like.

“I think everyone contributed in this game, and it definitely set the tone going into the second half that we had a lead, to let us calm down. …They (OR) didn’t make a couple of shots, which hurt them a little bit.”

The Cavs were among the top teams in Division II all year and many were looking at them as the favorites if everything broke their way.

“The whole year, my whole four years, it was incredible to finally finish it out with a championship,” Simco said.

“At the beginning of the year, we talked about our goals,” Etten said. “We were working toward our goals all year. These guys, we kept after it. … The seniors have done an excellent job as leaders, the captains did a great job getting us to the right spot.”

The spot reserved for champions.