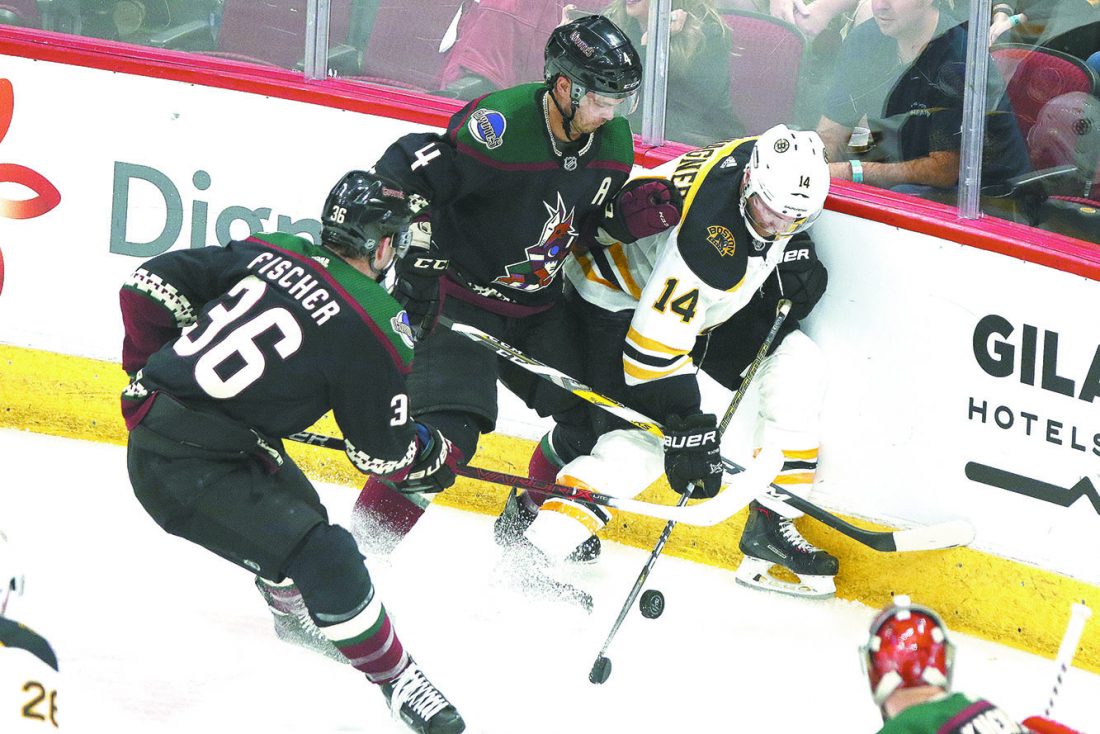 Boston Bruins' Chris Wagner (14) gets pinned up against the boards by the Arizona Coyotes' Niklas Hjalmarsson (4) and Christian Fischer (36) during the second period of an NHL hockey game Saturday, Oct. 5, 2019, in Glendale, Ariz. (AP Photo/Darryl Webb)

He turned away every one and the Boston Bruins won yet another game in the desert.

Halak stopped 35 shots, Brad Marchand scored and the Bruins extended their winning streak over the Arizona Coyotes to 15 straight games with a 1-0 win

“It’s good to get in the game early and if you get tested early you stay focused more,” Halak said. “That’s what happened tonight.”

The Bruins opened defense of their Eastern Conference title with a 2-1 victory over Dallas on Thursday night behind Tuukka Rask’s 28 saves.

Boston turned to Halak for Game 2 and the veteran was sharp against Arizona.

Halak stopped Vinnie Hinostroza on a short breakaway in the first period and slid over to get a skate on Clayton Keller’s shot from the slot. He also stopped Michael Grabner on a short-handed mini breakaway later in the period and had Phil Kessel muttering to himself with a glove save in the third.

Halak faced a flurry of shots after Arizona pushed late in the third and turned those away, too,

“He was good like Tuukka the other night,” Bruins coach Bruce Cassidy said. “Not a lot of rebound issues, pucks were sticking to him and I think we did a good job of clearing the ones that didn’t.”

Darcy Kuemper stopped 23 shots to keep Arizona it in, but the Coyotes couldn’t convert on numerous good scoring chances – just as they did in the opener at Anaheim. Arizona has not beaten Boston since 2010 in Prague.

“Play like that, most of the nights you’re going to come out on top,” Coyotes center Derek Stepan said.

“I like tonight. Sometimes you get snake bitten. Their goaltender stood tall and we didn’t bury them.”

The Coyotes made one of the biggest offseason splashes by acquiring Kessel in a trade with Pittsburgh.

Kessel had an assist on Arizona’s only goal in its opener on Thursday, but the Coyotes lost 2-1 to Anaheim.

Kuemper, who played well after Antti Raanta was injured last season, stopped 27 shots in that game and started again Saturday after Raanta was recalled from Tucson of the AHL.

Arizona controlled play most of the first period until Boston made a push. Marchand beat Kuemper to the stick side with a wrister from the left circle with less than two minutes left.

“I didn’t see anything,” Marchand said. “I just tried to get it on net and it found its way in.”

Kuemper made some difficult saves in the second period, stopping David Pasternak on one shot and sliding over for a spectacular save on Marchand’s rebound attempt.

Kumper also stuffed Chris Wagner on a near breakaway early in the third period and gave the Coyotes a chance with several quality saves.

“He had a really good game,” Coyotes captain Oliver Ekman-Larsson said. “I thought when we turned a couple pucks over in the second, he kept us in the game. It could have been a different game there. He’s a good goalie and showed it tonight.”

NOTES: Arizona D Alex Goligoski played his 800th career game. … Boston C David Krejci made his season debut after missing the opening game with a lower-body injury. … The Coyotes are 0 for 4 on the power play this season after going 0 for 3 against Boston. … The Bruins have won nine straight in Arizona.

Boston plays at Vegas on Tuesday.