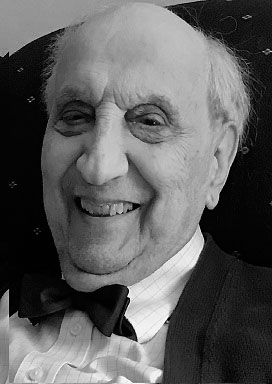 John G. Economopoulos, 96, Nashua native and longtime educator, passed away at his home, Friday morning, November 22, 2019 after a brief illness.

A son of the late George J. and Nicolitsia (Dogopoulos) Economopoulos, he was born in Nashua on February 27, 1923. After graduating from Nashua High School in 1941, John enlisted in the Army and served as a combat infantryman under General George Patton during World War II.

After the war, John attended the University of New Hampshire, where he earned his BA and MEd in education. He completed his post-graduate work at Columbia Teacher’s College. While at UNH, John met Dorothy Angelopoulos of Dover, NH. They married in 1949 and shared 70 years together until her passing on April 30th of this year.

A life-long New Hampshire educator, John began his career as a high school history teacher and then served as a high school principal in the communities of Newmarket, Henniker and Hillsboro-Deering. He was the principal of Woodman Park Elementary School in Dover before joining the State Department of Education in 1958. For 33 years, John worked tirelessly as the Director of Elementary Education and Assistant Chief of the NH Department of Education. He had a lasting impact on public education in NH, developing the state’s first elementary school guidelines and standards. Throughout his life John believed in the power of education and the potential of each and every student.

John loved Greek food, York Beach, the Red Sox and bowties. Most of all, he loved his family. He will be deeply missed by his daughter and son-in-law, Karen Economopoulos and Stephen Thomas and their children, Kylie and Alexa; his son and daughter-in-law, Philip and Nancy Economopoulos and their children, Johnny and Jason; and many nieces and nephews. In addition to his wife and parents, John was predeceased by three brothers and sisters-in-law, Dan & Kiki, Peter & Penny, and Harry & Evelyn and cousin, Sam “Kiri” Dogopoulos.

There are no calling hours. His funeral service will be held in Saint Philip Greek Orthodox Church, 500 West Hollis Street, Nashua, Saturday, December 7th at 11 a.m. Interment will follow in Woodlawn Cemetery. Friends are invited to attend. The family has requested that in lieu of flowers, donations may be made in his memory to Saint Philip Church Campership Program, 500 West Hollis Street, Nashua, NH 03062. To view online, please visit www.farwellfuneralservice.com