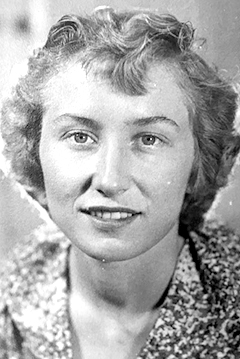 Mary Duncan Pike Williams, 91, passed away peacefully in her sleep on September 7th at Freedom Square Nursing Home in Seminole Florida from complications related to Alzheimer’s. Mary, also known and lovingly remembered as “Dunc”, ‘Sis’ and ‘Mar’ was born on July 1, 1928 in Nashua New Hampshire, the daughter of Bert and Bertha Duncan.

Hollis NH is where Mary spent most of her life and while growing up there, enjoyed sports, playing trombone and generally tormenting her 3 brothers- whom she found far to fuddy-duddy for her liking! After graduating High School and College- Mary went on to establish a career as a dental hygienist, where she worked for over 40 years. Most people don’t know Mary played semi-pro basketball and once opened for a Celtics game long before basketball was a legitimate women’s sport. She also enjoyed softball as well as curling in later years and after moving back to Hollis in 1964, frequently volunteered for town athletic programs for girls.

Mary was predeceased by her first husband, James William Pike Jr. in 1958 and raised 3 children on her own. She met Roger Williams while on the curling squad in Nashua and they enjoyed 37 years together. They settled in Beverly Hills, FL and proceeded to spend their time “literally” on the golf course- enjoying a life they both loved immensely.

Mary’s fun-loving spirit, vibrancy and can-do-it attitude will be greatly missed by those who knew and loved her. Mary is survived by her three children, a brother, four stepchildren, many grand and great grandchildren and nieces and nephews.

A memorial service will be held at the Hollis Congregational Church. On October 19 at 1:30 PM.

In lieu of flowers we ask that donations be made to the Alzheimer’s foundation.