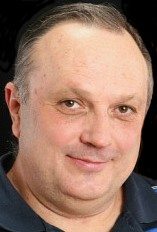 Rino J. Giordano, 62, passed away at the Community Hospice House in Merrimack NH, on March 11, 2018 following a brief but courageous battle with cancer.

Rino was born in Springfield MA on July 3, 1955. He was the son of the late Christie and Beverly (Belville) Giordano. Rino grew up Belchertown MA and after living in other parts of the US during his career, settled in Hudson NH in 1998.

He served his country honorably as a Fire Protection Specialist, EMT and Space Stations Operations Technician in the US Air Force. He earned a Commendation Medal for Meritorious Service during his tour of duty in Kunsan, Korea.

Rino was employed by Northrop Grumman in Cambridge Mass as a Senior Satellite Engineer for the Chandra X-Ray Observatory. During his career, he enjoyed working on many satellite programs including those monitoring the space shuttle missions. He was a self-taught master of many trades. He loved to use his talents to help others. He was a member of the Hudson Fish & Game Club.

Rino will be missed by his loving wife of 41 years, Trudy (Czupkiewicz) Giordano, his son Christopher and wife Tarnya, his Grandsons Xavier and Aiden and his dog, Rascal. His sisters, Gina Papineau and Patricia Chalue along with brothers, Edward and Franco, also survive him. He was predeceased by his son, Daniel and his brother Mario and his “Little

Visitation will be Saturday, April 7th from 2:00 – 4:00 p.m. at the Beers and Story Belchertown Funeral Home, followed by a gathering at the Belchertown VFW. Donations in his name can be made to the Muscular Dystrophy Association at www.MDA.org or to the Community Hospice House, 210 Naticook Rd, Merrimack, NH 03054.