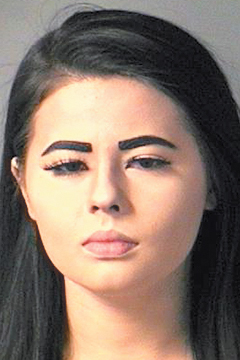 MERRIMACK – Alexa M. Cho, 20, of Merrimack, faces two counts of animal cruelty after she allegedly allowed a German shepherd to suffer from malnourishment and live in squalor.

Merrimack police said that on July 24, they responded to 17 Sycamore Drive to check the conditions of a dog believed to be inside the residence. Upon the officers’ arrival, they learned a German shepherd had been living there, but had not been seen for nearly a year.

The officers could see through the window that the dog, later identified as, “Turbo” looked extremely malnourished. Turbo was living in extreme squalor, with feces and urine surrounding him in the kitchen where he was confined. The officers could also see that the food and water dishes were empty, with the water dish containing mildew.

The officers attempted to make contact with the owner, later identified as Cho, who did not reside there, but Cho did not return any calls or attempts to contact. The residence appeared to have been left vacant for several months. Officers had grave concern for the condition of Turbo. Entry into the residence was gained through an unlocked door and Turbo was taken into protective custody.

He was then released to the Animal Rescue League of New Hampshire for care.

Approximately one day later, Cho contacted an animal control officer after she learned the police were looking for her. Cho eventually surrendered custody of Turbo to the Animal Rescue League.

At this time, Turbo’s health is grave and his adoptability is in question due to the neglect he endured.

Cho was arrested on Monday on the two counts of animal cruelty, along with a charge of failing to register a dog and the failure to vaccinate a dog. She was released on personal recognizance bail. Her court date is Aug. 22 in Ninth District Court, Merrimack Division.

Police are urging people who own pets, but find themselves unable to care for them, to contact their local police department or animal shelter to turn over ownership. There are organizations which are willing to give an animal the care they deserve.