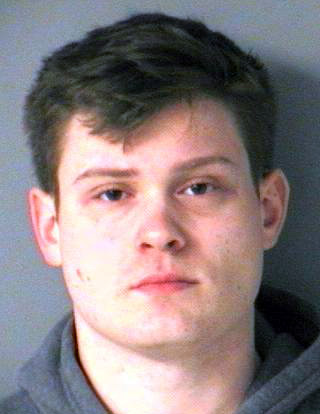 MERRIMACK – The mid-April collision involving a car and a pedestrian on Daniel Webster Highway has resulted in an arrest, according to police – not of the driver, but of the pedestrian.

Brian Caron, 22, of 514 Vinton St. in Manchester, suffered serious injuries when struck by the car near the Merrimack Post Office the evening of April 13, police said. But after further investigation, it was Caron for whom police issued an arrest warrant, on which he turned himself in over the weekend.

The rather unusual series of events that led up to police issuing the warrant began about 10 p.m. when officers on patrol came upon a group of people “gathered in the roadway” near the post office, police said.

“Upon making initial contact with the subjects, it was discovered than an accident occurred involving a pedestrian” who had serious injuries, police said.

Moments earlier, as his friends watched from the parking lot of the Merrimack Commons plaza, where they’d gathered after leaving the Jade Dragon restaurant, Caron allegedly walked up the embankment toward Daniel Webster Highway, jumped over the guard rail, “then ran in front of a (car) traveling north” on the highway, police said.

The impact seriously injured Caron and damaged the vehicle, but the driver was unhurt, police said.

Caron’s friends made their way to where he lay on the highway to check on him, and the officers came upon them moments later.

Medical personnel were summoned, and an ambulance transported Caron to a local hospital for treatment, police said.

In the meantime, officers spoke with Caron’s friends and other witnesses, including the driver of the car. Although police weren’t specific, it appears the driver wasn’t charged.

Police investigating the incident eventually drafted the warrants for Caron’s arrest on one count of criminal mischief, a Class B misdemeanor; and one count each of disorderly conduct and pedestrian in roadway, both of which are violation-level offenses.

Police in their statement didn’t give any additional details surrounding the circumstances of the rather odd incident, nor did they address possible motives.

They did say that once Caron was made aware of the warrants, he “surrendered himself to police,” and was subsequently booked on the charges.

He was later released on personal recognizance bail, and is scheduled to appear in Merrimack district court on May 9.