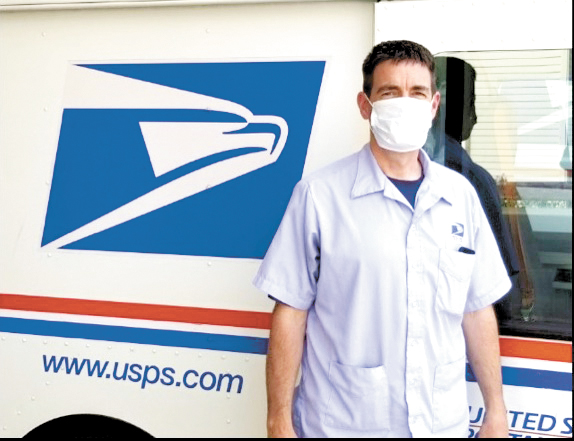 The post office in Warren, Pennsylvania, has 16 vehicles, and Tim Rossman disinfects them daily.

The process begins at 6 a.m. Rossman cleans the vehicles while another custodian takes a rag and bleach water solution to scanners, keys and cards. The inside of the vehicles used to be cleaned about every other week. Today, when a mail carrier enters a vehicle, they are acutely aware that Rossman had been in it before them.

“You go into one and you can smell the bleach,” Rossman said. “[Mail carriers] know when they’re coming into that vehicle that it’s disinfected and clean.”

Rossman has worked for the United States Postal Service for more than 25 years, working as a clerk, a mail carrier, and most recently, the building maintenance man and custodian. When asked if the COVID-19 pandemic has created an unprecedented state of affairs at work, Rossman considered the question, and then responded, “I was here during the anthrax scare.”

The anthrax scare took place for about two months one week after the 9/11 terrorist attacks. Bioterrorism in the form of anonymous letters laced with deadly anthrax spores began arriving at newsrooms and congressional offices across the country. Ultimately, five people died, and 17 others were infected by the bacterial disease.

Rossman, who was a mail carrier at the time, remembered increased protocol, protective gear and fear.

“Everyone lost their naiveté after 9/11,” he said. “I think we’ve all been hardened since then. So since [COVID-19] happened, the feeling I get is that people take this extremely seriously.”

Ogden Newspapers spoke to six employees – including Rossman – in the Warren, PA, post office, to find out how the postal service protocol there has changed, and how employees view the safety measures.

Jason Wingard, the postmaster at the office, said that due to the pandemic, they have implemented more regular cleaning schedules. The lobby, Wingard noted, is wiped down every 45 minutes to an hour. He’s adjusted the schedules of custodians to have them arrive earlier, and the start time for many mail carriers has been adjusted to either 30 minutes before or after their typical start time, so as to avoid crowding in the building.

Wingard said there has been no dip in service nor need for lay-offs or furloughs. In fact, the workload has increased due to the number of people shopping online.

“Most days feel like Christmas,” said Karen Vile, a city mail carrier. “The mail volume has mostly been very light but the package increase has been phenomenal.”

Some businesses in Warren have placed their mail on hold, Wingard said, but city carriers’ jobs have not been affected because there is no all-business route.

Vile, for instance, covers a 12-mile radius with the potential for about 600 deliveries at both residencies and businesses, and the businesses she covers, such as the courthouse, jail and a school, are still accepting mail and packages from her.

All three mail carriers Ogden spoke to, Vile, city carrier Randy Matson and rural carrier John McGuire, said they aren’t concerned about contracting the virus. Matson said his “mounted” route doesn’t require him to often walk up to people’s front doors. Normally, he can drop off his packages or mail in a box.

McGuire, who often leaves packages at people’s front doors, typically rings the bell or knocks on the door to let residents know he was there. But he said that since he is supplied with a mask and gloves, he isn’t concerned about touching door bells or knocking on doors.

Vile said she’s also not worried she’ll contract COVID-19, but she does put hand sanitizer on her hands about once every three stops.

“It’s taken a toll on my hands,” she said. “The first layer of skin on my hand has literally peeled off.”

When a mail carrier has to go to someone’s front door and drop off a package that would typically need to be signed for, there is new protocol in place to avoid the possible transmission of the virus, Wingard said. Instead of signing off for a package electronically on the mail carrier’s scanner, now, recipients can show their ID to the carrier from afar, and the carrier can sign off on the package and note that it was ID verified.

Clerk Kaycee Perdue, whose duties include sorting mail and spending time at the service window working with customers, among others, said it’s an honor to be a key component of getting citizens what they need. Perdue has seen an increase in packages of medication and food.

“I think it’s a privilege to provide these to our customers,” she said.

Perdue said customers in the post office have been respectful of maintaining social distancing guidelines. There are marked lines on the floor for people to wait in line six feet apart, and there is also plexiglass separating postal service workers from customers.

Wingard, the postmaster, said he feels increased responsibility in keeping his team and the citizens of Warren safe, and that he knows the postal service is a vital service for the community.

“We are making sure people get their stimulus checks,” Wingard said.

He, like Perdue, also noted the importance of the medicine, food and other essential needs that mail carriers deliver to citizens.

“I think we are a very vital part to kind of keeping the country going,” he said.

Rossman, the custodian, did, however, express some consternation about picking up COVID-19 in the office.

“There’s no doubt in my mind if someone brings this into my family, it’s going to be me,” he said.

Rossman said he read a lot about the virus when the outbreak was beginning.

The Centers for Disease Control and Prevention states on its website that while the virus can survive for a short period on some surfaces, it is unlikely to be spread from international or domestic mail.

Before the COVID-19 outbreak, Rossman said the post office was always clean. But now, the amount of cleaning could even appear to be “overkill” to some. From 6 a.m. to 2 p.m., Rossman “just cleans and cleans.”

Even so, he knows that during a time when a pandemic has crippled the nation, his job has become even more important than ever.

“It’s more stressful because I have more to do, but in a strange way it’s more rewarding,” he said. “I truly don’t want my coworkers to get sick.”