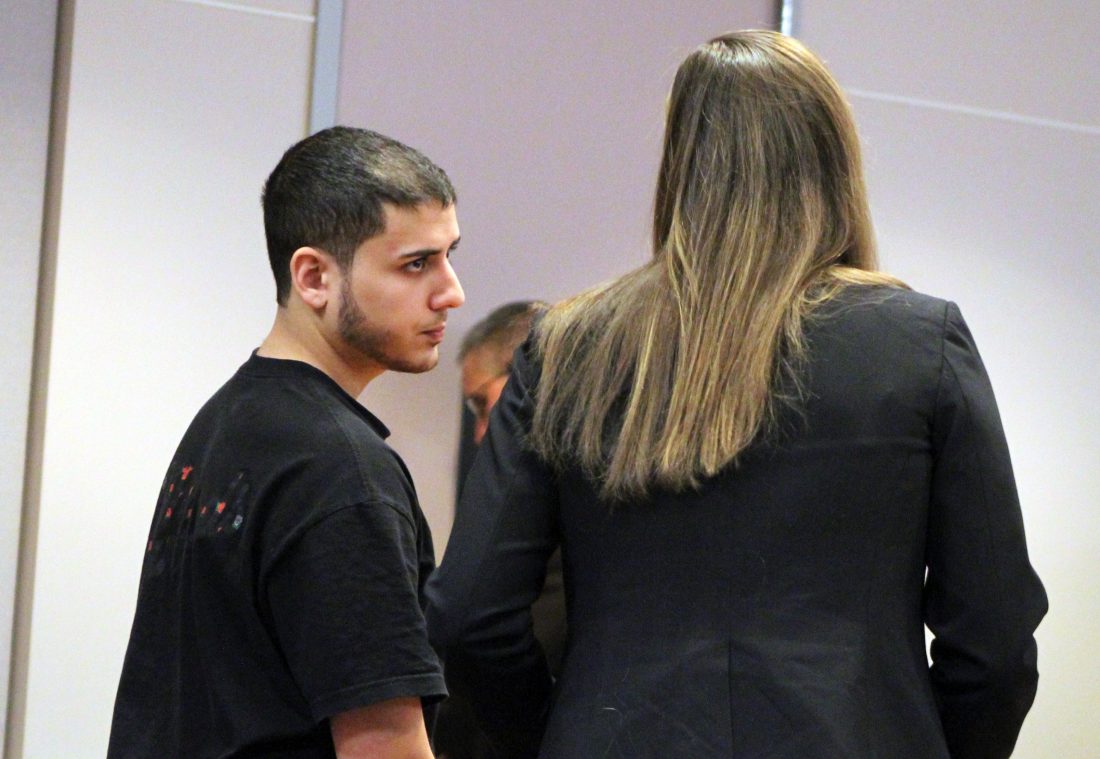 Telegraph photo by DEAN SHALHOUP Tobias Demitrius, who was arraigned Wednesday on drug and court order violation charges following his arrest Tuesday, listens to his attorney, Amanda Armillay, during his bail hearing.

NASHUA – In July, Tobias Demitrius, a 20-year-old former Nashua man now living in Manchester, allegedly convinced a man he was paying too much for his marijuana, and that Demitrius could allegedly offer him a better deal, according to police reports.

So the would-be buyer took Demitrius up on his offer, police wrote, and said he’d leave $35 in a particular car for Demitrius, who would in turn allegedly take the money and leave “a slice,” roughly 3.5 grams, of marijuana in the man’s car.

But what Demitrius didn’t realize at the time was that the would-be buyer was actually a Nashua police officer, and that the alleged transaction led to a several-month investigation that culminated Tuesday in Demitrius’s arrest.

Demitrius, whose address is listed as 52 Rimmon St., Apt. 2, was jailed overnight, and appeared in Hillsborough County Superior Court-South Wednesday for arraignment and a bail hearing on the four charges he’s facing.

Judge Jacalyn Colburn, noting Demitrius has a suspended sentence and an open case currently pending, said she also disagrees with his attorney’s contention that Demitrius doesn’t have a lengthy criminal history and is not a flight risk.

Reminding Demitrius of the cases he has pending, Colburn told him, “It’s time you start following the rules,” to which Demitrius nodded his head in apparent agreement.

Colburn set a dispositional conference in the matter for 9 a.m. April 4 in the Nashua court.

According to police, officers conducting surveillance during the alleged July “buy” followed Demitrius as he drove from the site, and later performed a vehicle stop. They issued him a summons for operating after suspension and allegedly found a small amount of marijuana on him.

Roughly two weeks later, according to police, an undercover officer got in touch with Demitrius, who allegedly told the officer he’d just gotten “a ball” of cocaine and would sell one gram for $80, police said.

This time, police said, Demitrius allegedly entered the undercover vehicle and took the $80, but allegedly did not leave the cocaine.

As the investigation progressed, police said, they eventually sought, and were granted, a warrant for Demitrius’s arrest, on which they took him into custody Tuesday at a gym on Amherst Street.