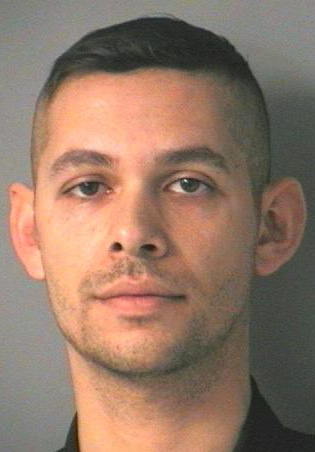 MERRIMACK – When Corey Godinez was terminated from his job at a Merrimack-based ambulance service Thursday, police say he allegedly threatened to return with “enough firepower to take people out,” then allegedly added that “he did not care how many people had to get hurt,” according to police.

Then on Friday, police said, Godinez, 29, of 34 Redfield Circle, Derry, was spotted driving by the ambulance company, allegedly carrying a loaded handgun and an AR-15 rifle with “multiple loaded magazines” and additional ammunition in his vehicle.

In what appears to be a case of opportune timing, officers, having been called by company officials, were at the company’s Columbia Circle headquarters interviewing employees when Godinez drove by, police said.

Once officers were able to identify Godinez’s vehicle, police said they pulled him over and initially detained him.

Through what police called a “roadside investigation,” the officers learned Godinez allegedly had weapons in his vehicle, and subsequently placed him under arrest.

Upon executing a search warrant on the vehicle, officers seized the loaded handgun as well as the AR-15, its loaded magazines and the extra ammunition, police said.

Meanwhile, officers transported Godinez to police headquarters, where they booked him on several charges including one count each of attempted first-degree assault, attempted second-degree assault, and criminal threatening, all felony offenses.

He was also charged with one count each of harassment, and loitering or prowling, Class A misdemeanors.

Police said Godinez was ordered held on preventive detention pending arraignment and a bail hearing, which are scheduled for 1:30 p.m. Tuesday at Hillsborough County Superior Court South in Nashua.