Knights’ Dupere making a name for himself in FCBL 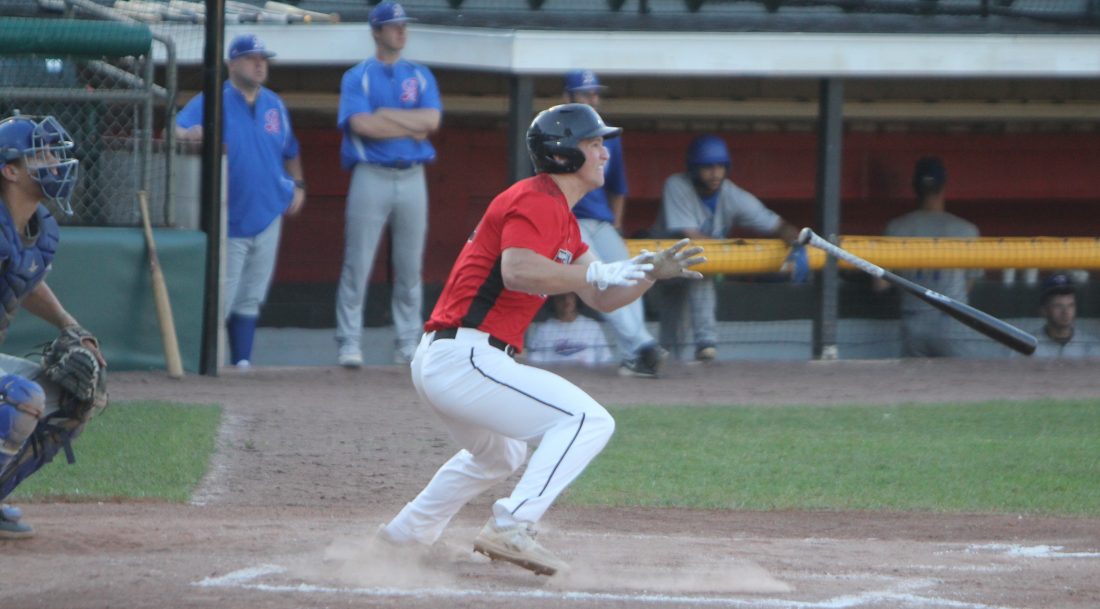 Telegraph photo by TOM KING Nashua Silver Knights All-Star slugger Jared Dupere has been able to flip a few bats this summer with his power display.

Neither, it turns out.

Opposing pitchers don’t care. They likely have their own pronunciation, probaly one not printable after he’s bashed a few around for six homers and 25 RBIs, both second in the Futures Collegiate League at last look. And don’t forget those 10 doubles and a triple, as of late this past week. No wonder eyebrows were raised when he was initially left off the Futures Collegiate League All-Star Game roster, only to have justice prevail when he was added late this week as a “Commissioner’s Pick” by FCBL head Joe Paolucci.

He was the Silver Knights Player of the Week and has always sought to be a home run, extra base hit slugger.

“I think power has always been a part of my game,” said the Amesbury, Mass.native and soon-to-be Northeastern University sophomore. “Ever since I was a young kid, so it’s all kind of connected together. I get a good piece of the ball, put a good swing on the ball, it usually goes a long way.”

He lifted weights a lot as a young kid, so he the power developed. But he also wants to be careful not to get too bulky. “I don’t want to overswing,” he said. “I also want to be an average guy, hit singles and doubles, hit the gaps. High .200s, and hit for power.”

His formula is simple.

“It’s a lot about seeing pitches, seeing guys off the mound every day,” he said, adding his junior-senior year in high school he discovered he could hit the ball far. He hit nine homers his junior year, but was hurt half his senior season in high school.

Dupere went to Governor’s Academy, a private boarding school in Byfield, Mass., which certainly prepared him for school. His sister went there and loved it, plus a family friend coaches football there. And yes, the 5-foot-11 200-pounder did play quarterback, and still misses football a bit.

“I said, ‘Why not?’,” he said with regard to Governor’s Academy. “I went there and it was awesome.”

He loved Northeastern, the campus, the coaching staff headed by Mike Glavine, “and I thought it was a good fit for me,” he said, adding he plans on switching from business to communications.

Glavine asked Dupere where he wanted to play this summer, and he had heard of the Silver Knights through a couple of teammates and thought it would be a good spot. Then when he first saw Holman Stadium, he knew it.

Nashua manager B.J. Neverett had Dupere on his list (via Glavine) as early as last September.

“Everything Mike said about him was right on,” Neverett said, adding that Dupere’s playing time at Northeastern was limited after his numbers dipped his freshman year. “He’s a really good kid, and he’s starting to figure it out a little bit at the plate.

“He’s got really, really high bat speed. There are balls that he’s hit that have been absolute missiles that were outs. He hit one ball the other day that the kid never saw it. Great kid, doesn’t say much, just goes about his business. He’s going to do well at school.”

Dupere struggled his freshman year, hitting .156 in 90 at-bats, but did hit four homers. He started 22 of the 29 games he played in, but clearly the Futures League has helped him adjust much better to the college game.

Thus he says he also enjoys the Knights and the FCBL. “It’s a mix of levels, mix of talent,” he said. “It’s good to see and talk with guys how their college experience was, we’ve got different guys from around the country – Florida, Maryland, so it was really cool to talk with them, how their season went, how their coaches were, how things were at their school.”

Dupere says he’s been working on his approach at the plate, leading to an increase in productivitiy.

“What works for me is I’m seeing ‘Do I want to hit fastball early in the count, do I want to hit curveball?’,” he said. “And there’s a ton of different pitchers we face, so it’s having a different approach toward the pitcher, which I need to improve on, and it’s coming, which is good.”

A few teammates walked by Dupere when he was doing an interview, and one just blurted out “Home runs.”

Pretty much the best way to say Dupere’s name this season.