Batchelder is hoping to bounce back with Silver Knights 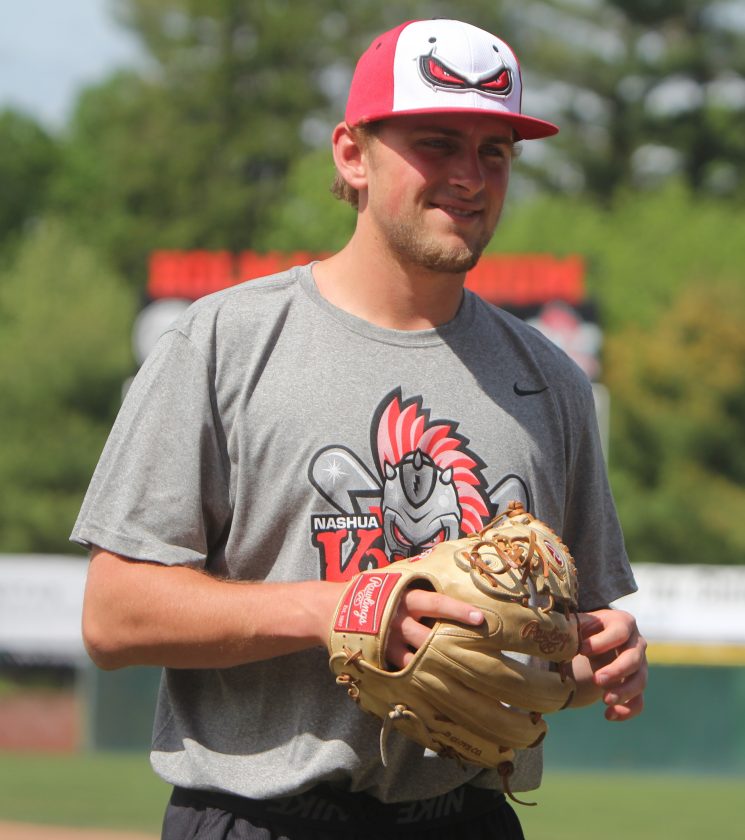 Telegraph photo by TOM KING Souhegan alum Owen Batchelder is very happy to be spending his summer at Holman Stadium with the Silver Knights, hoping to set the stage for an improved college career at Northeastern.

NASHUA – The road back from injury is always a bumpy one, as Amherst’s Owen Batchelder is finding out.

A summer with the Nashua Silver Knights might make that road a bit smoother. At least that’s what the soon-to-be Northeastern University junior hopes.

“I tried to get back into the swing of things this past fall and spring, but it didn’t end up going too well (with the Huskies),” the former Souhegan High School pitching standout said. “So this is kind of a clean slate start for me. I’ll try to get out here, get some innings, get some (at-bats) and just kind of good summer.”

Batchelder played sparingly as a freshman in 2018 and midway through that season felt pain in his elbow. The diagnosis was a partial UCL tear, but one that didn’t require surgery, just a lengthy rehab. But, because he was shut down, he wasn’t able to play with the Silver Knights as scheduled last summer.

“Last summer I was pumped to do that,” he said. “And I couldn’t, so it’s great to get another shot at playing here. It’s tough, I was bummed. I missed out on opportunity to play here, be 20 minutes from my house. It’s a nice to have that opportunity this summer.

“I’m pumped. It’s going to be nice having my family and friends around. I came and watched the Nashua Pride when Butch Hobson was coaching here. I’ve been coming here since I was really young. My freshman year at BG (Bishop Guertin, after which he transferred to Souhegan) I got to play a couple of games here.”

Batchelder then was used quite sparingly by the Huskies in 2019 (just two relief appearances, and one at-bat), and that will make this summer important, but he has to battle his way through a crowded roster. He’ll get some bullpen opportunities as well as some plate appearances. After Wednesday’s tough 10-8 loss at Brockton, he is 2 for 3 at the plate with a walk, single, double and two runs scored, and has appeared on the mound in two games without giving up a run in 1.1 innings. Wednesday he pinch-hit to lead off the ninth inning and singled to start a four-run rally that just fell short, scoring a run.

“We’re just letting him play; when we get a chance to get him in, we’ll get him in,” Silver Knights manager B.J. Neverett said. “He’s pitched a little bit, had one good outing, one that wasn’t so good. He played first base the other day and had a walk.

“He’ll get a little taste here and there. We’re not, it’s really not a situation where he’s going to come in and play full time. He’s not ready for that.”

“It was tough, but you just have to grind your way through it,” Batchelder said. “Keep working. I was only a sophomore this year, I have two more years to make a big impact wherever (position) I play. So that’s why this summer is kind of like I want to hit, pitch and figure out what I want to do, where my Northeastern coach Mike Glavine sees me doing next season. So I’m kind of doing anything I can for this team and Northeastern.”

That’s the thing, while the lefty Batchelder was the ace of the Sabers staff and started the 2017 Division II title game vs. Portsmouth, he still has never wanted to give up hitting.

“Obviously I got recruited to go to Northeastern to pitch,” he said, “and haven’t put up any good stats. I was a good hitter in high school, so I picked up a bat this winter and started hitting with some kids on our team. Sort of got back into the swing of things, took BP every game this season, started getting some live at bats toward the end of the season in intersquad games.

“Got a couple of at-bats here and there during the season. I love them both, and want to get back into the high school mindset of playing baseball every day and not really worrying about where it is. … Pitch, hit, do whatever.”

“I know he didn’t get much time (at Northeastern),” Neverett said. “There’s always reasons for that. I know at Northeastern it was an old (veteran) staff. I think that backed him up because he didn’t get off to a good start. At college they get buried. It was an entire staff returning from the previous year (which Batchelder mainly missed).

“He’s got a better chance of pitching here than anything else. We’ll throw him up there for an at-bat. His swing is pretty good.”

Either way, Batchelder can relax, feel comfortable in familiar surroundings, and try to get back in his groove.

“That’s why it’s nice being here, kind of a clean slate,” Batchelder said. “Kind of start over. … It’s nice. It definitely feels like home. I’m excited.”