Cook hopes to return favor after another Knights rescue 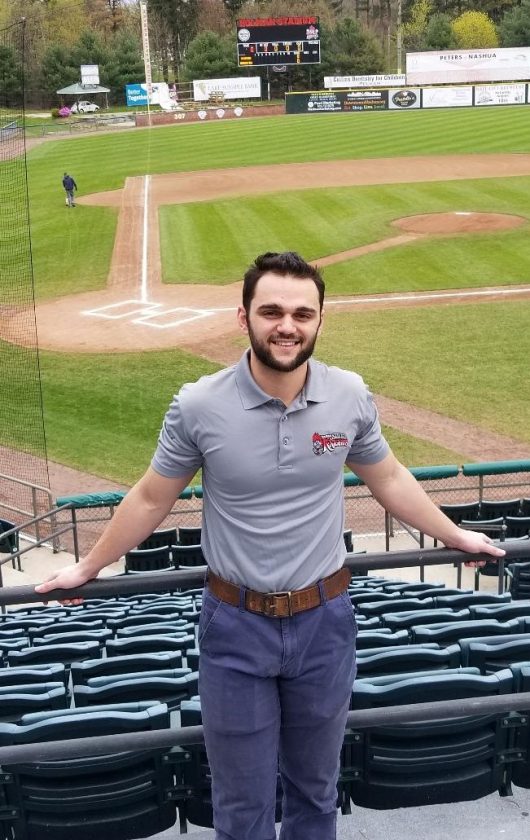 Telegraph photo by TOM KING Former Silver Knights standout Cam Cook is beginning a new chapter with the team as its operations manager, back at the place he loves the most -- Holman Stadium.

NASHUA – The Nashua Silver Knights have had a habit of rescuing Cam Cook.

Scooped up from a tough situation playing in a summer collegiate league in New York, he returned that favor a couple of years ago by becoming the Futures College League record holder for hits in a single season in 2017 and helping Nashua win two straight Futures Collegiate League championships.

Now, the Knights have reached out and pulled him away again, this time from a recruitment and sales job he really wasn’t into in Needham, Mass. to make him their operations manager, a defacto assistant GM to new general manager Dave Pahucki.

“We’ve gone over this story before, I feel like I’ve gotten saved a little bit,” Cook said with a grin from behind his desk in the Holman offices.

Cook’s real world job after graduating from Nichols College a year ago wasn’t a bad, but it just wasn’t baseball.

“Being outside of baseball was very hard for me,” he said. “It was good they kind of threw you into the fire. It’s not that I hated it, but you definitely have to like what you do.”

Enter the Nashua Silver Knights. Cook, a key cog in two straight Nashua Futures Collegiate League titles – was hired – make that rescued – a month ago by the team’s new owner, John Creedon, Jr., to be the Knights operations manager.

Welcome back to Holman Stadium, Cam Cook, a place Cook never wants to leave and didn’t when his FCBL eligibility was up. He’ll get calls from friends to do things in the area in the evening while he’s still at the stadium, and he basically turns them down.

“It’s not a big deal, being at Holman, I don’t want to leave Holman,” Cook said. “It doesn’t feel like work, the day goes by fast, and I get to watch a lot of baseball games (high school) right now.”

And now, his first front office season is fast approaching with the opener set for May 29. How did Operation Rescue Cook II come about? Cook was certainly a fan favorite during his season-and-a-half in a Knights uniform. Former Nashua teammate Kyle Bonicki, who was coaching at his alma mater, Clark University in the Worcester area, was approached by Knights team president Dave Peterson about perhaps working in the Nashua front office.

But Bonicki is still pursuing a playing career, going the independent baseball route. So instead he contacted Cook to see if he was interested, and he’d recommend him to ownership.

“Being in baseball my whole life, that’s where all my connections are in all walks of life,” Cook said. “It’s a no-brainer.”

Cook met with Peterson in the Holman suites and a deal was done. He had only been back for a couple of games and last year’s Opening Night ring ceremony.

“It was good to be back,” he said. “It was tough to watch a game, knowing I could be out there. A couple of fans were egging me on, ‘Go grab your jersey.'”

They may do that this summer, as Cook has traded in his bat/glove for a walkie-talkie, roaming the Holman stands and making sure the game night procedures are going smoothly for all involved.

Cook is perfect for the job, given his popularity with the fans when he played here.

“We want to pick everybody’s brain, season ticket holders, etc.,” Cook said. “Myself and Dave and everyone on the staff we’re going to be very much out and about, out in the community.”

Ironically, Cook has always had an eye on the front office life of a baseball team, and paid a little bit of attention to it when he played here. He’d watch when he could at what former general manager Ronnie Wallace and assistant GM Cheryl Lindner would be doing.

“It always interested me,” he said. “You don’t see everything obviously when you show up to the ballpark playing. But I always saw Ronnie and Cheryl running around all the time. During the course of the season, you get close to someone interning or in the ticket office, so I kind of got to see what they were doing.

“Even from a young age, you want to play a sport as long as you can. But when that’s up, you want to stay in it.”

And this is way of doing it. Cook knows there are all types of intricate details that make up the daily operation of a team. And the fact he’s fully invested still in the team he played for, means he’ll pay attention to those details.

“That’s what I said to Dave in the interview, I’m going to give you everything I’ve got,” Cook said. “There’s a bit of a learning curve. For example, I learned the ticketing system and it took a chunk of time. But we’re there. At the end of the day, no one’s going to care about the Nashua Silver Knights and Holman Stadium as much as I do.”

So as a player he watched. He listened. In his own way, he learned. He played at a small Division III school, and his home field in the summer collegiate league in New York was at an elementary school. So for him, Holman was an eye opener.

And now he is entrusted in making sure it’s a suitable home for fans and players alike.

“As the season kicks off, it’s going to be making sure everything is organized,” Cook said. “Beginning with the morning of a game. Making sure the boards are all updated. The suites are properly set up, because there are going to be different events, outings, birthday parties. There are going to be five live music events (on the deck next to the offices on the first base side). … Making sure all that is set up well before we even think about opening up the gates.”

During the game, he’ll be circulating around the park, making sure everything is running smoothly, along with Pahucki.

Now that he’s been on a job for a month, what has Cook learned about the business that perhaps he didn’t know before?

“I knew everything that goes on, it’s just how in depth and how everything is structured,” he said. “You look out and you see the outfield is plastered with billboards. What goes in to getting that done? Who’s pricing it? Who’s installing them? Who is going to pay for the installation fee?

“Ticket sales, what goes in to set up a new system, processing, printing. Like I said, the first week, overwhelming. Then we break it down, list by list, one by one, and then it’s ‘OK, we’ve got this.'”

Cook said he was surprised at how much detail is involved in putting the product fans and players see – and are a part of – together.

“It’s run like a minor league/big league organization,” Cook said. “Sure it’s on a smaller scale, everything’s relative, but we still have 2700,2800 seats to fill, a lot of networking, a lot of community events to be involved in.

“And I think what shocks me, and it’s awesome, is the first week (he was on the job), people kicking down the doors. ‘Hey, when can we get our season tickets? When’s the promotional schedule coming out?'”

And that, Cook has learned, is a good thing.

“It puts the pressure on us to get it done as fast as we can without rushing anything, but making sure it’s still done to the best of our ability,” he said. “But it shows people are still excited, which gets us excited. We’re not resurrecting anything from the dead. Of the 2,000 here, a thousand are diehard fans who will go home upset if the Silver Knights lose. The other half will come for cornhole tournaments, dollar beer night, promotional schedules, live music and stuff like that.”

Cook just uttered words like a true minor league baseball front office type. Could he have imagined himself doing that in the past?

“It’s one of those things like when you’re a kid on those video games, you can hit GM mode, or franchise mode,” he said. “So it’s cool helping out Dave and Peterson and the Creedons do it all. What’s awesome is you can have those ideas and run with them yourself and run them by (ownership). Everybody’s very, very engaging here.”

Cook finds it ironic he’s now working for the ownership whose original team (the Bravehearts) he helped beat two years in a row in the FCBL Finals.

“As a player, that was your rival,” Cook said. “But I liked a lot of the guys on that Worcester team. We were probably the two most succesful teams in the league.

And one of those “Nashua ideas” has always been to rescue Cam Cook.

“I’ve come to where I’ve left everything,” Cook said. “I’m not going to be in the dugout, in the clubhouse.

“I’m in the front office…It’s going to be extremely exciting to come to Holman every day…Warm weather, hot dogs, baseball.”

And the return of Cam Cook, saved again by the Silver Knights.