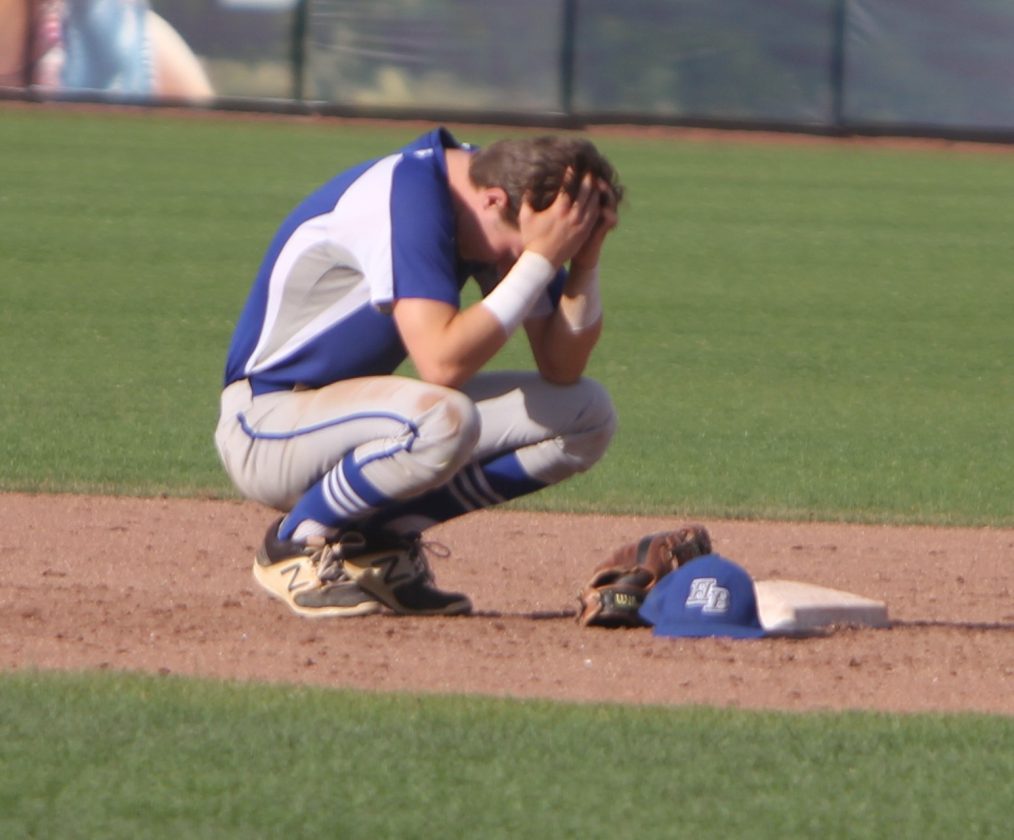 Telegraph photo by TOM KING Hollis Brookline senior captain Joe Messina reacts to the game-winning rally by Bow in the bottom of the seventh in a tough 5-4 loss in Monday's Division II title game in Manchester.

MANCHESTER – One out away, one strike away, and instead the Hollis Brookline High School baseball team has to settle for perhaps being one year away.

One year, that is, from the Division II championship that eluded the Cavaliers on Monday, 5-4, in walk-off fashion at the hands of the top seeded Bow Falcons at Northeast Delta Dental Stadium.

Trailing 4-3 in the bottom of the seventh, the Falcons got a bases loaded two-run blast into the right field corner by junior Riley Elliott on a two-out, 3-2 offering from Cavaliers sophomore reliever Brandon Hsu. Pinch runners Brian Carter and Evan Provost scampered home with the tying and winning runs and Bow had its third straight remarkable walk-off win of the tournament – and the title.

It was a gut-wrenching defeat for the No. 2, 16-3 Cavaliers, who had won their share of close games all season, but not the final one.

“Sometimes you’re going to be on the other end of it,” first-year HB head coach Jay Sartell said. “I figured it was going to be tight all the way through. … That kid (Elliott) made a big play when he needed to.”

And Bow walked a tightrope again as they did in the quarters and semis.

“I think they’re trying to give me a heart attack,” Bow coach Ben Forbes said. “That’s just clutch. (Elliott) had a little bit of ice running through his veins in that situation. Luckily they played us to pull a little bit, he has a tendency to hit it to the right side. He hit it down the line, and that’s what we needed. … I knew they knew they could do it.”

The Cavs thought they themselves could do it, too, as the lead changed hands four times until the final hit. Bow (18-2) grabbed an unearned run in the third on Hsu’s – then at second – first miscue of the season, a bad throw.

Hollis came back in the top of the fourth off Falcons starting pitcher Elliott when senior shortstop Joe Messina doubled in a run to tie it and later scored on Nik Direnzo’s sac fly.

Back came the Falcons in the bottom of the frame when HB starter Henri Boudreau balked in a run and then gave up an RBI triple to Connor Blandini to give Bow a 3-2 lead.

But the Cavs counter-punched against Falcons reliever Ben Harris as four straight reached base against him, including Grant Snyder and Max Mello, who delivered RBI singles to give the Cavs their 4-3 lead.

An unsung hero for Bow might have been freshman reliever Matt Lamy, who after spelling Harris, issued a walk, and then retired seven straight and eight of nine to finish the game.

Enter the bottom of the seventh. Hsu retired the first batter and the Cavs could taste it. But Matt Hamilton blooped a single to left, and Harris mashed a pitch into the left field corner to put runners at second and third.

Hsu got a huge strikeout of Steven Guerrette, and then Sartell opted to walk Lamy, who had reached base three times with two hits. Up came Elliott, who was up in the count 2-1 before waving at a Hsu fastball. Then the Cavs’ sophomore bounced a pitch to his catcher brother, Kyle, well in front of home plate, to make it 3-2. And we know what happened with the next pitch.

“Just amazing,” Elliott said. “It was located outside, a little big high. But I like that outside pitch, and that’s where I drove it to right field. It was amazing, they’re (the Cavs) a tough team.”

“The margin for error is non-existent when you get to a team that good,” Sartell said. “That’s the way it is. Well-coached. We set it up, we had all the people in the right positions, just had to execute the plays, and that’s what they were doing on the other side.”

You never know, these two teams could be back in this game next year. HB graduates Mello, Messina and Brandon Hsu while Bow loses just Blandini and Anthony Sampo.

“This is the end of my career,” said Messina, who knelt down alone at second for a few moments after the game. “But this is a new beginning for the Cavaliers baseball program. … I’m grateful to be part of a team that did this, I’m proud of every single one of them.

“Sometimes in baseball, and just in life, things just don’t go your way.”