Bishop Guertin girls get their Fourpeat, 46-33 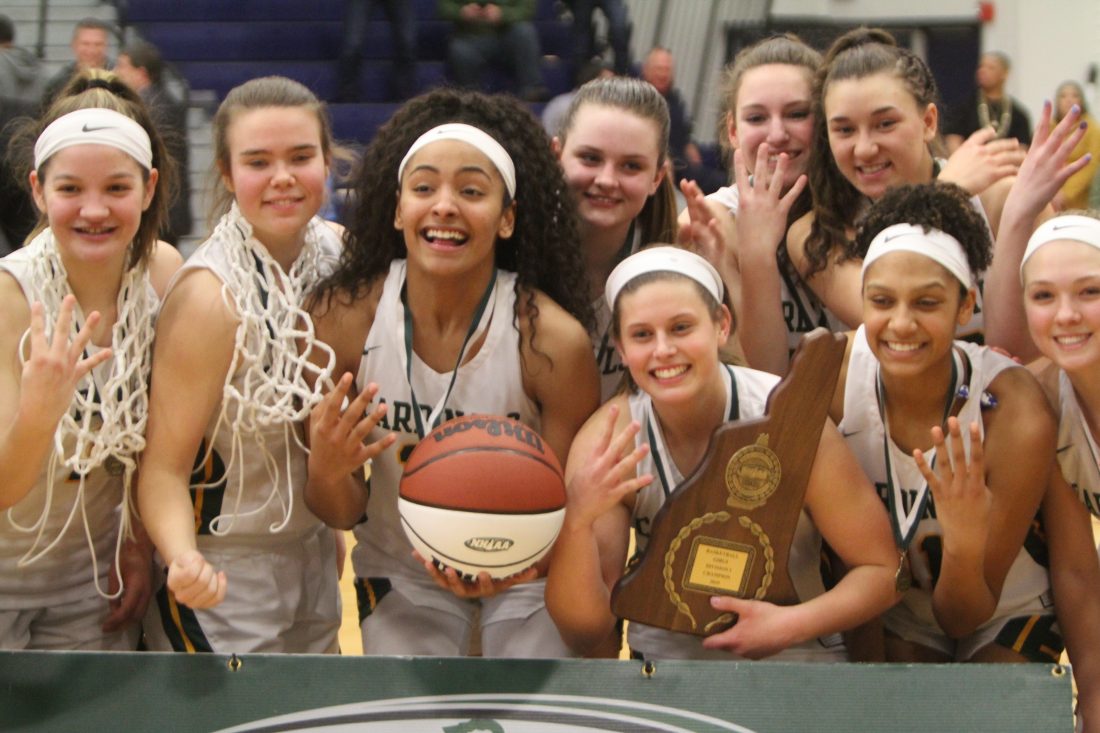 MANCHESTER – Now the defense can rest.

It’s been a common theme for the Bishop Guertin High School girls basketball team throughout its now four-year title run under head coach Brad Kreick – play defense or, well, don’t play at all.

On Saturday at Southern New Hampshire University’s Stan Spirou Field House, the Cardinals took that to heart in clamping down on a tough Portsmouth team, 46-33, to win their fourth straight Division I championship.

And it was the Cards’ top thing on Saturday, as they held the Clippers to 12 first half points and that made things a lot easier down the stretch.

“For all the stuff about us being able to score the basketball, getting up and down, I told the kids today ‘You’re going to have to defend to win.’,” Kreick said. ” I thought we were fantastic defensively today. Did everything hard.

“It sounds cliche that defense wins championships, but we scored 46. So we didn’t have a huge offensive game. But we just really, really buckled down defensively and the kids played their tails off.”

The Cardinals finish their season 24-0 overall (21-0 in Division I), and basically just add another chapter to the dynasty.

And when Guertin had a little defensive lapse at the end of the third quarter, junior Hannah Muchemore came to the rescue with a buzzer-beating 3-pointer from just behind the halfcourt line to put BG up 36-24.

“It just kind of gets everybody cranked up a little bit at the break,” Kreick said. “I thought the kids played with great poise. Portsmouth kept coming, kept coming, and the kids made the plays when they had to. But again, I think we won that game on the defensive side of the floor.”

And that defense caused the No. 6, 16-6 Clippers to turn the ball over 21 times, probably a third of them unforced. Remember, this was a Portsmouth team that scored 51 points the first time these two teams played, 48 in regulation of a 61-51 BG overtime win.

“They did a good job of pressuring the ball on the perimeter, made it hard for us to make the passes to the wings, to get the angles for post entry,” Clippers coach Tim Hopley said. “But even that was no surprise, we had seen enough of it the first time that we knew what we were going to do. But we didn’t play disciplined enough to get our perimeter players down underneath the bigs, get themselves open. … And again, one of those things where they did enough to force us to play uncomfortably.”

Guertin jumped out to a surprising 9-2 lead, and the Cards were up 14-8 after one, getting some early dribble penetration. Those chances lessened as the game went on and they had to begin hitting from the outside, taking a 20-12 lead into the locker room at the half.

Things seemed comfortable as they were up 33-18 and then Portsmouth made a mini 6-0 run, four of those points by Corinne Lamond (eight points). But then Muchemore launched her trey. That made it 36-24 after three.

“When I hit that shot, it just changed everything,” Muchemore said. “We all felt great at that point.”

But the Clippers didn’t. At that point, it was fairly obvious the Cards weren’t going to fold. Muchemore made another trey to put BG up 42-27 with 6:23 to play, and it was simply over.

“They made more shots (17 of 40 from the floor, 7 of 20 from beyond the arc) tonight than they did in the regular season game,” Hopley said. “Normal teams you may have one or two (shooters), but you’ve got (with Guertin) Muchemore, Aaliyah (Forman), Carney, four on the court most of the time for them. … What do you do?”

But still, the emphasis was going to be on defense. Portsmouth was just 12 of 34 from the floor, and only one of three from beyond the arc.

“I think we knew from the jump it was going to have to be on our defense,” Guertin junior Ava Owens said.

This was different for the Cards than a year ago. They graduate one senior (Gabrielle Sousa), like last year, but they were healthy and went through an entire season unscathed, making it special.