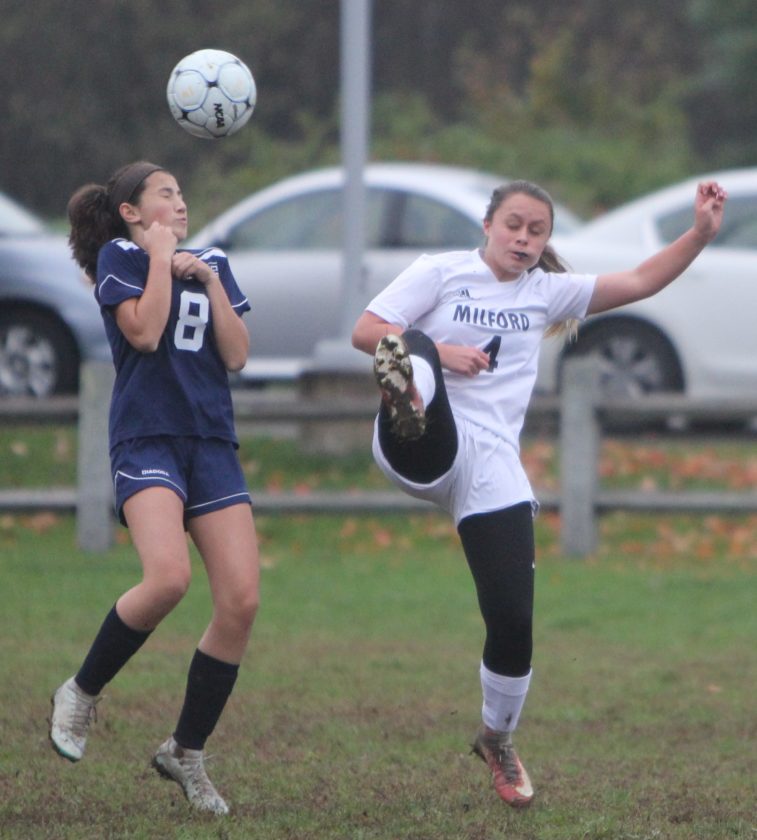 HOLLIS – In the game of soccer, your big chance doesn’t come that often, so you had better take advantage of it – especially when your team is in protect mode.

Hollis Brookline High School junior forward Tasha White did just that in Monday’s 1-0 Cavalier win over rival Milford. White was the lone forward back as the Spartans (9-3-2) needed almost everyone to handle the furious Spartan pressure in the second half.

But there she was, finding herself one on one against Milford goalie Jade Gregg (four saves), and put home a deflection on her own rebound in the 62nd minute for the game’s only goal.

“It was a team effort, it wasn’t just me,” White said. “We changed our formation so we had more on defense, we worked the ball around and knew (that chance) was coming, and there it was.”

White is right, it wasn’t just her, because HB goalie Maggie Crooks made eight saves, including two crucial ones, and defenders like Sarah Birch and Christina Balsamo, along with others, kept deflecting Spartan missiles.

“Here’s the deal,” said HB coach Peter Clarke said, his team now 10-3-1 in Division II after a rough season a year ago. “Milford came out with a great game plan, we know them well, they thoroughly outplayed us in the first half.

“We went with an adjustment in the second half, with just one player up top (White), and they were still giving us a hard time. Sometimes your players just have to gut it out, keep your bodies in front of it and wait for an opportunity. The patience of Tasha up top to wait for that and stay at it on a second effort … We found a way to win.”

All Milford coach Russ Matthews could do was smile at the bad luck of his team dominating yet coming up short.

“We played well, we had our opportunities,” he said. “We just didn’t do it. … And that’s all it takes is one.”

And the Spartans had plenty of chances to get that one, including two indirect kicks in the box. But their best chance came about 56 minutes in, when Milford’s Mikayla Thompson turned and launched a rising rocket that appeared destined to wreck havoc. A leaping Crooks got a few fingertips on it, and the ball deflected off the cross bar over the top of the goal. Groans by the Spartan fans, cheers from the HB crowd.

“I had no idea if it was going over, so I went for it anyway,” Crooks said. “If I didn’t have my defense, so many of those balls would’ve went in.”

One almost did, as in the 73rd minute, Milford’s Katie Lorden sprung free down left wing and fired a rolling shot that Crooks barely got her fingertips on and the ball trickled just wide. “I didn’t know what was going to happen,” Crooks said, “but very lucky it went out.”

“She’s awesome,” Clarke said of Crooks. “This is the third or fourth game when she’s made a game-saving save, up high. I thought we were done. Her reactions were spectacular. … For just a freshman, she’s getting it done.”

“We need,” Matthews said, “to finish. Hopefully we can execute better what we want to do.”

The Cavaliers simply survived and cashed in their one chip.

“If we want to make a run in the playoffs, that’s what we have to do,” Clarke said, “because sometimes you’re going to be outplayed.”