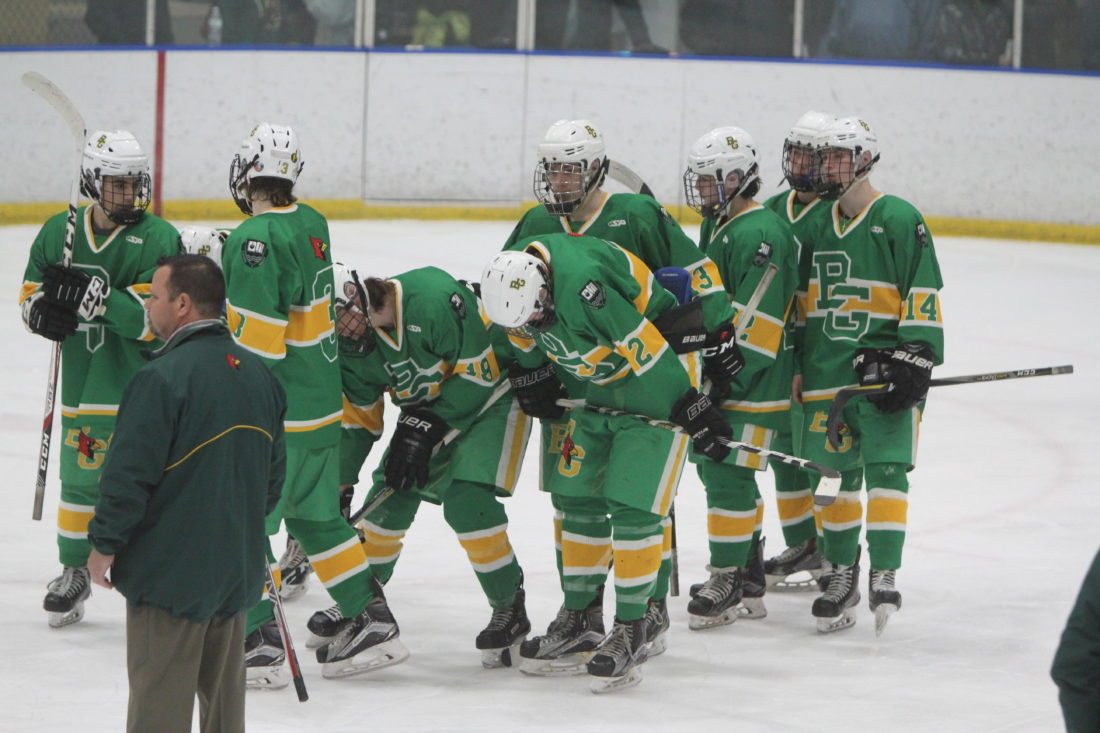 Staff photo by TOM KING Bishop Guertin's Doug Barker (2) and the rest of his teammates ponder their 3-2 Divison I semifinals loss to Hanover on Thursday.

MANCHESTER – There was a wall keeping the Bishop Guertin High School boys hockey team from its third Division I final in the last five years.

The Marauders for the second time this year topped the Cards, but this one was the most important, a 3-2 Division I semifinal win at JFK Coliseum.

“He’s one of the best goalies in the state,” Guertin coach Gary Bishop said, his sixth ranked team done at 12-7-1. “He’s big, he positions himself well. … We were hoping we could generate more offense, but they packed it in. They packed four guys in low, and once they got it, threw it out.

“They had a good game plan, give them credit. They knew what they had to do to stop us.”

LaRock had 31 stops – same as the Marauders’ 3-1 win back in mid-January – including two late long distance Cardinal power play blasts that he somehow saw through traffic with Guertin down by a goal.

“I’d like to meet the last goaltender who’s beaten Bishop Guertin twice in a year,” Hanover coach Dick Dodds said. “Has that ever happened?

“For the first time in my career, we had a checking line. We just threw them out (against Guertin’s Ben Peterson-led top line) and don’t bother going in the offensive zone. Let’s just keep them away from our net.”

Guertin outshot the Marauders by a whopping 33-17 margin, but as Bishop said, “It’s not about outplaying them, it’s about outscoring them.” And for the second time, Peterson was held scoreless by the Marauders.

The Cardinals euphoria in the second period after tying the game at 1 didn’t last long as Hanover’s Duncan Bailey blasted one past Cards goalie Colin Freitas (assisted by Rowan Wilson) just over 1:30 later, at 10:09 of the second. It was just Bailey’s second goal of the year, and it seemed to spark his team.

“He doesn’t get a lot of ice time but he works his tail off,” Dodds said. “It was just one of those goals that’s big because it came right after they scored.”

The Marauders added a second on the power play, the second of two David Lehmann goals at 12:28 (assisted by Matty Gardner and Owen Stadheim).

It stayed that way heading into the third.

The Cards were down 1-0 after one period, after Lehmann somehow squeezed one past Freitas 2:30 into the game. Stadheim got the assist.

The Cards, though, tied it on a shorthanded breakaway goal by Doug Barker at 8:31 of the second. Barker was fed up ice by a nice Ryan Flynn pass and Jared Zeichick also was credited with an assist.

Down 3-1, Guertin, closed to within 3-2 on Liam Nye’s blast from just above the right circle, off a nice drop pass by Max Trawick at 6:05. Mike Schaff also got an assist.

The Cards had a power play beginning at 9:20 of the third, but couldn’t muster a shot on LaRock. They got another at 11:46 when Lehmann went out for hooking.

For the Cards, there was hope. But Hanover killed off two penalties in the final five minutes.

“Once we got behind, we decided to get a little bit individualistic,” Bishop said. “Even on that last power play, we had two good chances, but we decided we weren’t going to pass.

“They weren’t going to let Peterson (25 goals this year) score. Last year in the playoffs we beat them up there and he had three. Dick Dodds doesn’t forget that. … We haven’t finished.”

And unfortunately, the Cards are.