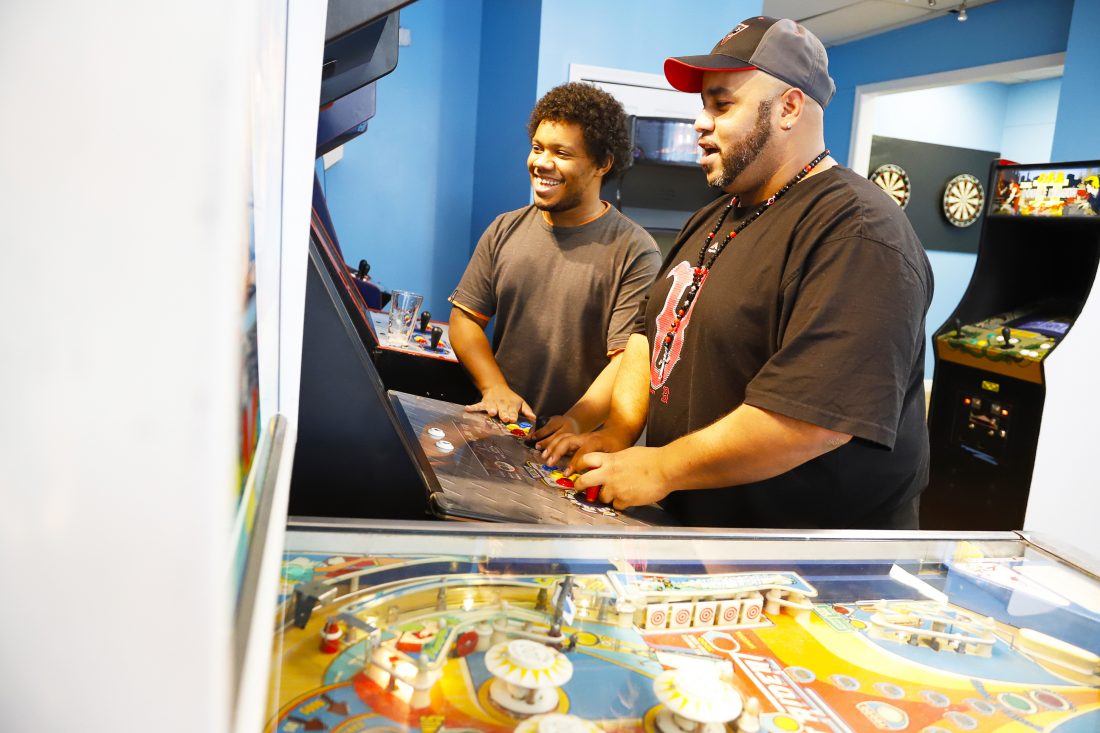 NASHUA – Those of a certain age will remember pumping countless quarters, or tokens, into arcade machines such as Pac-Man, Space Invaders and Donkey Kong, while those perhaps a little younger got the same general experience with Mortal Kombat, Street Fighter and Gauntlet.

One can now enjoy some of these classic arcade games again in their original forms at the Pho Tai Loc Bar Vietnamese Restaurant and Game Room, located in Nashua’s Railroad Square.

With Wednesday’s official opening of their game room, the establishment now offers vintage arcade machines, including Pac-Man, Centipede, Donkey Kong and Mortal Kombat, as well as the classic pool tables, foosball and darts as a part of a lineup of 20 gaming platforms – including three Nintendo GameCube systems.

Jimmy Tran, the establishment’s public relations representative and son of principal owners, Hien Mai and Nghia Tran, said the business model for the three-room establishment is to focus on quality and the customer’s experience.

“We want to give good food and quality service; show people that we’re traditionally family-run, and also provide entertainment that is different,” Tran said. “You can come and have a fun time with the atmosphere and all.”

Much of the entertainment will take place in the form of the arcade room, which Tran said took months of preparation, research and travel. He and his family aimed to offer something to the residents and visitors of Nashua – something completely different and fun.

“We wanted to do something different for Nashua because we didn’t see anything like this here, you know,” Tran said.

“We did a lot of research for these classic games, and we have more to come,” he continued while talking about the games.

“These were selected piece by piece – we had to travel to New York City to pick them up, and go to different locations to pick them,” Tran added. “We had to find the right clientele the right market that would come in and want to play our games.”

They have their game room for entertainment, as well as the bar featuring multiple TVs that serves classic Asian mixed drinks like mai tais and scorpion bowls, as well as sake – a rice wine – and a full menu of beer, wine and spirits.

The business is run by Tran’s parents and uncle, Phuc Phan – the restaurant’s cook, his cousin, Ngan Phan, and his daughter, Angel Tran. It has its roots in Vietnam.

His family left the country, which at the time was still seeing conflict from the Vietnam War which officially ended in 1975, as they searched for a better life in the U.S.

While they started in the business of nail salons, the family has moved to the restaurant industry seamlessly.

At Pho Tai Loc, which opened nearly one year ago, they serve authentic Vietnamese dishes including – as the name would have it – their classic pho with beef or chicken options made with a bone broth. They also feature a grilled pork dish served with rice and egg and pork-based Bun Dac Biet vermicelli bowl, among others classic Vietnamese dishes.

Tran’s father Mai, said, “The main thing is my customer enjoy the time to eat. Then, they have the arcade to come over and play.”

From Vietnam, to New York City, to Lowell, Massachusetts, and ultimately to 28 Railroad Square, the Tran and Phan family have brought authentic Vietnamese food with a twist to entertainment to downtown Nashua.