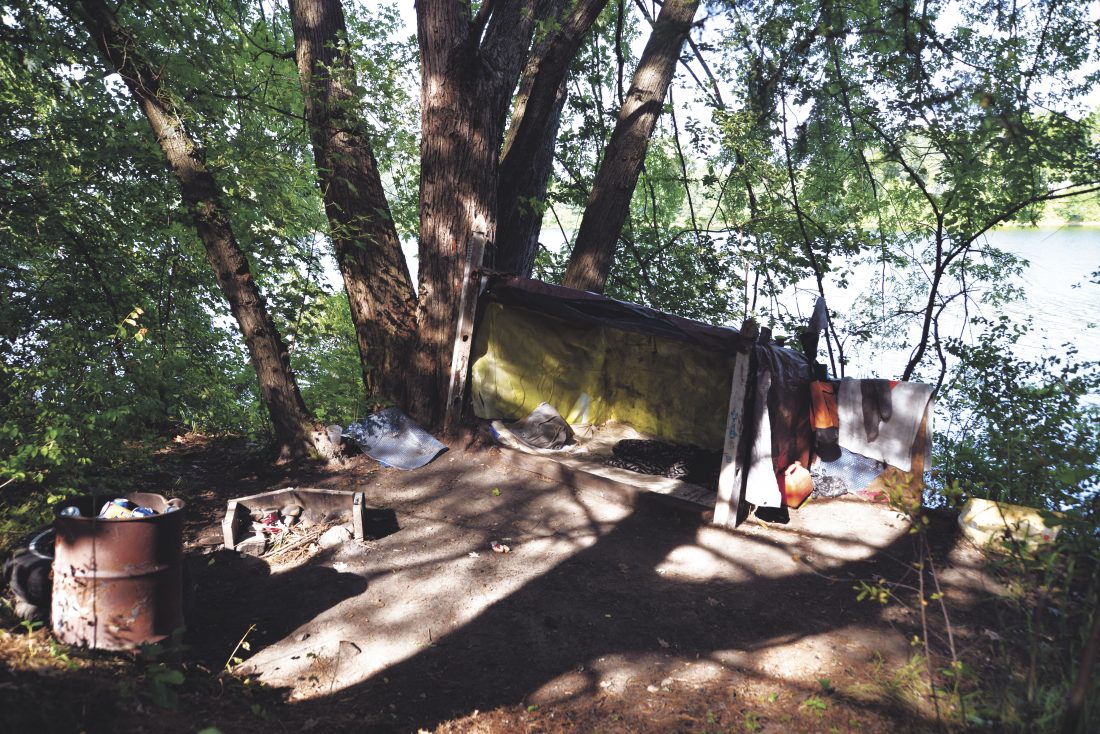 NASHUA — United Way of Greater Nashua President Mike Apfelberg said a January count showed 266 people in the area were officially homeless, but that number does not include those who may be “couch surfing” or living with a friend’s parents.

Furthermore, Nashua Alderman Tom Lopez said he believes that every night, at least 20 people are sleeping outside. He said he recently witnessed two people sleeping on the Nashua Heritage Rail Trail — and another person sleeping on the ground right under a window at City Hall.

And as the cost of rent escalates in Nashua, so too is the need for financial assistance among area nonprofit agencies and the Nashua Welfare Department.

Those representing nonprofits throughout the city share many of the same beliefs: That the scarcity of affordable housing is a leading factor as to why there is an increasing need among those both of the brink of becoming homeless, and those who find themselves experiencing homelessness.

While Nashua features many organizations working collaboratively to assist these populations, the need still outweighs what various entities are able to provide.

According to a report by the National Low Income Housing Coalition, a person needs to earn $23.23 per hour to afford a typical two-bedroom apartment in New Hampshire.

The Front Door Agency CEO Maryse Wirbal said if someone is on a fixed income, such as Social Security disability, they can’t afford anything in this area unless they have a rental subsidy.

“There are people working living in the shelters,” Wirbal said.

Reinke said his agency is the only provider of emergency shelter for families in the city, although there are others, such as the Front Door Agency, who offer transitional housing. Nonetheless, NSKS is having a huge issue in terms of meeting the needs of families experiencing homelessness. Reinke said the shelter is always full. Recently, it had one bed open for a single man, which Reinke said is unusual. Other than that, it is always full with families and individuals.

Reinke said rents have been going up in the city dramatically during the last two or three years. He said during this time, more calls are coming in from families staying in their vehicles or couch surfing that just need a place to stay.

Whether crashing on couches or in cars, winter will hit the region sooner than folks may want to realize, so the need to get people off the streets will become all that much greater.

“When we talk about emergency preparedness, when we talk about the difficulty that the homeless face in the winter, it is because during the summer, we’re not doing anything,” Lopez said. “We’re totally OK letting people sleep outside in unsheltered conditions with no concern about where they’re going to be in the winter. This is the time where city welfare should be doing the bulk of its work so that in the winter, we’re not overburdened and all the shelters aren’t at max capacity.”

However, even on an 80-degree day, NSKS for example is lacking shelter space, which is why officials are planning on doubling the amount of family space they can accommodate by spending $3 million to renovate the former Sacred Heart School at 35 Spring St. by 2021.

Reinke said the shelter receives at least one call a week from families in need of a place to stay, but still, their shelter spaces are full.

“There are many factors that impact eligibility,” Mack said via email. “Department staff make a determination of need and what resources are available.”

Generally, when an person or household presents to the department, an intake assessment is completed to determine what assistance is being requested and what the urgency of the need is.

“We do have an application process and require and verification of income versus expenses for the household, whether a household of one or many people,” Mack said. “Applicants must be adults and we do not serve unaccompanied youth. We would refer unaccompanied youth to the New Hampshire Division of Children and Youth Services.”

Lopez said the eligibility criteria need to be focused on the most common ends, not the most expensive scenarios. He said no one wants homeless kids, or just homeless people in general on the streets. Additionally, Lopez said most of the shelters in the city can’t even support unaccompanied youth, and that there is no plan for how to do that. Also if the family has a youth, he said the eligibility for services are based on the actions of the adult(s), not the needs of the youth.

However, Mack said there are various housing support programs, rapid re-housing and transitional housing programs that have developed through the years. Additionally, he said there are also various factors that impact general assistance expenditures, including economic factors such as employment, wages, vacancy rates and housing costs, general costs of living, the availability of other community resources, etc.

Mack said if the department can only partially assist those in need, officials will connect people to their community partners. Of the eligibility decisions made from July 1, 2018 to June 30, 2019, Mack said the city:

Is The City Meeting Its Obligation?

One of those nonprofit organizations providing prevention services in Nashua is Corpus Christi Food Pantry. Susan Dignan was the food pantry director for six years before taking on a new role as assistance director. She said in a month, the number of calls they receive for help varies, but it could be over 100 a week that are coming in for assistance. She said many have been referred from city welfare.

“Summer months, we don’t feel the urgency with someone being on the street, not having a bed to go home to. But with the upcoming cold weather, it does present more of an issue or an urgency,” Dignan said.

Reinke said just last week, a gentleman came in to the shelter who couldn’t get to work for a week because he got a flat tire and needed to have it replaced. The shelter paid to repair his flat tire.

However, Reinke said that by that point, the guy lost his job. If he had got to them sooner, maybe they could have helped more quickly.

“The family that we helped last week with the tire ended up coming and staying in our shelter on Saturday,” Reinke said. “My understanding is that they couldn’t be helped by city welfare because they’d been helped once before in this past year. For example, one of their standards are, if we’ve helped you once in this past year, we can’t help you again. Is that a good standard or not? It is what it is.”