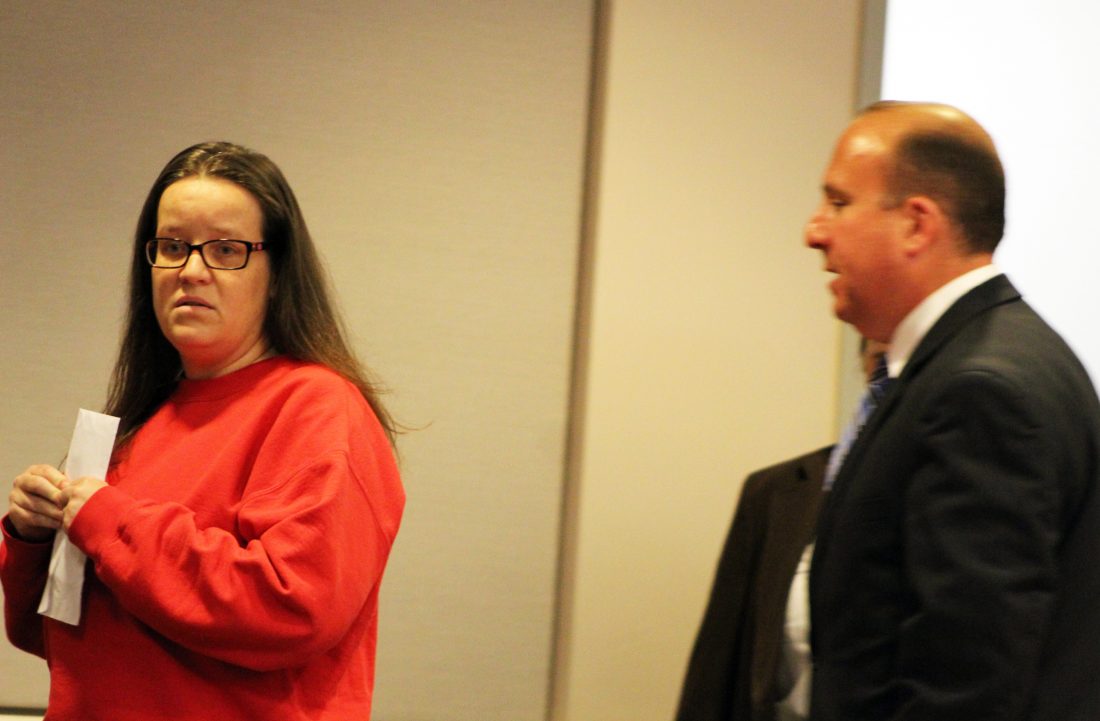 Telegraph photo by DEAN SHALHOUP Shannon Dannible, the former Litchfield school principal serving prison time for embezzling $152,000 from the school, enters Superior Court with one of her attorneys, Joseph Fricano, for a hearing held last Thursday on her motion for home confinement. A judge on Tuesday denied the motion.

NASHUA – Former Litchfield principal Shannon Dannible, serving time in State Prison for embezzling $152,000 from a private Catholic school, may reapply for work release if she wishes, but her request to be put on home confinement has been denied.

Superior Court Judge Jacalyn Colburn denied Dannible’s motion, in which she sought to serve the remainder of her term at her parents’ Seacoast home, where, she argued, she could work remotely, begin paying restitution, and be more involved in her teenage children’s lives.

Among the reasons behind Colburn’s decision, she stated via her three-page ruling, was the fact Dannible’s minimum parole date – April 6 – is less than a year away, and allowing Dannible to go home at this point “would eviscerate the purpose” of the sentence Colburn imposed in October, which she said “appropriately balanced the factors of punishment, deterrence and rehabilitation.”

More than five years after she was indicted on one felony count of theft, accusing her of stealing more than $152,000 from St. Francis of Assisi school in Litchfield while she was principal, Dannible, 42, of Amesbury, Massachusetts, pleaded no contest to the charge, in exchange for what was originally a term of five to 15 years in the State Prison for Women.

The indictment of Dannible in August 2013 followed a lengthy investigation that began when school staff and administrators started noticing irregularities in the school’s finances.

An audit uncovered the massive shortfall in school funds, news that shocked the school community and, Agati said at Thursday’s hearing, left an unknown number of students with “lasting educational deficiencies … because of her actions.”

Dannible was principal of St. Francis of Assisi from August 2007 until June 2011, at which time school officials said her contract was not being renewed.

Agati, both at the hearing and in the state’s motion objecting to Dannible’s request for home confinement, sharply rebuked the arguments she put forth in support of her motion.

Granting the motion, Agati argued, would “send her home to sit surrounded by the spoiles of her theft … she will reside inside her home as she wanted, with her personal books, clothing, satellite television, above-ground pool, jewelry, furnishings … all purchased, maintained or upgraded with the funds she stole,” Agati wrote.

The crime was committed “deliberately … (Dannible) knew she could act independently, without supervision, and steal from the school without raising red flags,” he wrote.

Agati also accused Dannible of “manipulating her staff and the school’s parents and children into believing she was a dedicated principal,” then “attempted to manipulate the court into finding her not competent to avoid the consequences of her actions.

“She now seeks to manipulate her way again – out of the sentence imposed by the court,” Agati added.

Colburn, meanwhile, credited Dannible for “remaining discipline-free” in prison so far, and cited the support she’s received by other inmates and prison officials as well.

Colburn also said Dannible’s earlier acceptance to the prison’s work-release program, known as Shea Farm, and gave her the OK to reapply to the program, if she so desires.

When she was accepted the first time, Dannible didn’t last long, telling the court at Thursday’s hearing she “was not prepared” for what she saw when she arrived at Shea Farm.

She was “horrified,” she said, when other inmates began “pulling drugs out of their purses.

“There were drugs everywhere,” she told Colburn, adding that the experience triggered “a breakdown.” She was subsequently returned to the general population.