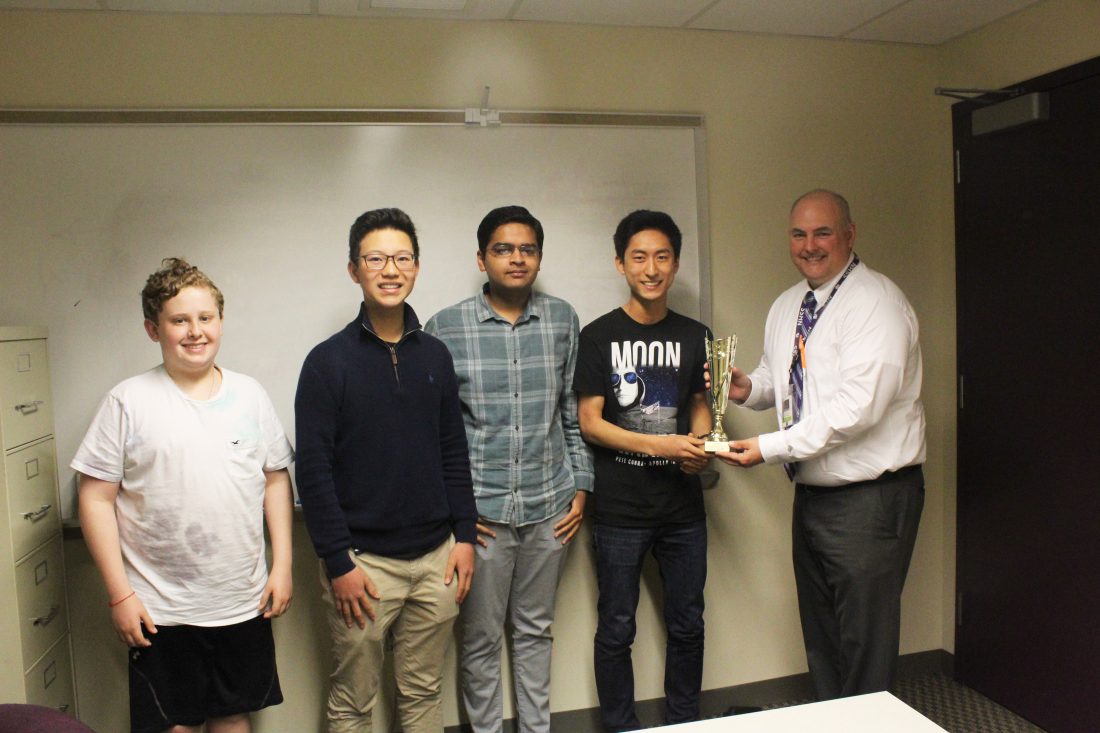 The students, freshmen Joshua Gao and Samuel Greenberg, along with juniors Jeffrey Lam and Adyant Shankar, have been working all school year to create a prospective company that utilizes low frequency sound waves combined with metamaterials to extinguish fires.

“We believe that this will be the revolutionary new product to combat wildfires or home fires,” Gao said.

Shankar added, “If you can imagine a smoke detector in a building, instead of just detecting the smoke, this will detect where the fire is located and extinguish it on the spot before it grows.”

The group’s main mission is to extinguish fires in a more eco-friendly manner, as opposed to using the chemicals discharged from a typical fire extinguisher.

Gao said chemical solutions existing are non-reusable, expensive and bad for the environment. He said sound waves are a total improvement.

“We believe that one of the world’s biggest problems is how slowly our ecosystem is devolving, and we believe that this could really help save the world,” Greenberg added.

Last summer, Gao met with U.S. Sen. Maggie Hassan, D-N.H., to discuss the possible creation of a platform for business leaders, technical experts and student innovators. Hassan then connected Gao with Small Business Bureau Director Liz Gray. From there, Gao brought Shankar, who is president of South’s Innovations Club, to a conversation with Gray.

Shankar and Lam, who is the Vice President of Innovations Club, had participated in other competitions, such as the Samsung Solve For Tomorrow Competition. Shankar was interested in the Conrad Challenge, and invited Lam and Gao to be on the team. Gao later invited Greenberg.

The Conrad Challenge is an annual, multi-phase competition that challenges students, ages 13-18, to use innovative and entrepreneurial skills to address global issues.

The challenge was created by Nancy Conrad, the widow of Astronaut Pete Conrad who commanded the Apollo 12 mission in 1969.

Lam said the first round of the challenge was an elevator pitch style, where they wrote a short one-page paper on their idea. From there, they moved on to create a business plan with all their details regarding their innovation, which totaled out to 36 pages. The business plan included technical details of the student’s product, all the way to the financials of the prospective company and the market analysis.

In early February, members of the group they were in the top five of their category and were invited to the Innovation Summit at Kennedy Space Center Visitor Complex in Merritt Island, Florida. The six categories of the competition include Aerospace & Aviation, Cyber-Technology & Security, Energy & Environment, Health & Nutrition, Smoke-Free World and Transforming Education with Technology. During the Innovation Summit, which took place April 23-26, the group presented their “Power Pitch” to a panel of judges from Conrad Foundation, NAVY, Microsoft, Smoke free Foundation, Harvard University, Stanford University and other areas. The team won the Pete Conrad Scholars Title among many other prizes, including $60,000 in college scholarships each, Dell laptops, initial seed capital funding of the project and a trophy, which they presented to South’s Principal Keith Richard on Monday morning.

Gao said receiving the award and recognition was nice, but, he added, “We believe the experience that you get there is unlike any other competition. There we met potential investors, we met scientists, a lot of people from different companies, CEOs and all these people from around the world.”

“I think it was such a great experience,” Gao said.

The group will be spending their summer researching at Tufts University’s Innovation and Entrepreneurship Center (TEC) for the business side of their innovation. They also hope to research at the University Massachusetts Lowell in their meta materials lab and utilize space at Olin College of Engineering.

David Radlo, from the Tufts University’s Innovation and Entrepreneurship Center (TEC), offered the students the opportunity to continue their research. Radlo advised and coached the team with Kaitlyn Lee.