Impacted workers will get back pay; President continues push for wall funding 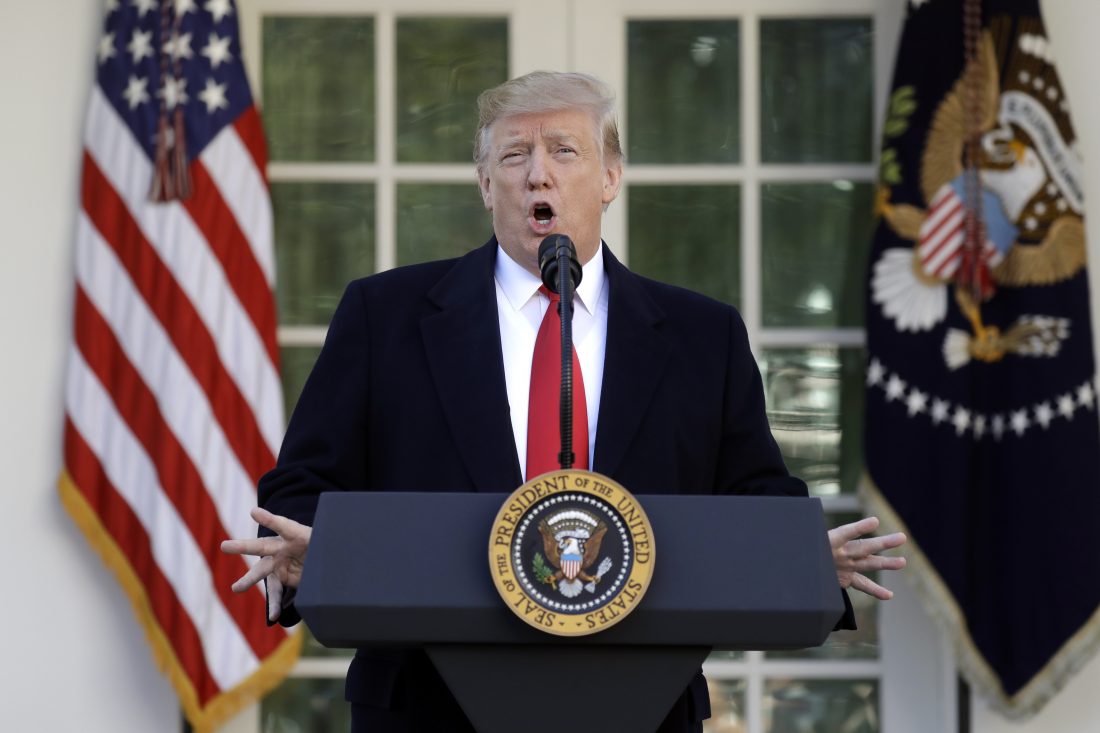 NASHUA – Democrats on Friday managed to keep the U.S.-Mexico border free of a wall, at least for now, by forcing President Donald Trump to end the 35-day government shutdown without providing any money for security.

“We’re grateful to Democrats on both sides of the Capitol for their unity. That was very, very important in these discussions,” Speaker of the House Nancy Pelosi said Friday afternoon in declaring victory. “It’s sad, though, that it’s taken this long to come to an obvious conclusion.”

Standing alone in the Rose Garden shortly after 2 p.m. Friday, Trump said he would sign legislation funding shuttered agencies until Feb. 15 and try again to persuade lawmakers to finance his long-sought wall. The deal he reached with congressional leaders contains no new money for the wall but ends the longest shutdown in U.S. history.

The deal includes back pay for some 800,000 federal workers who have gone without paychecks. The Trump administration promises to pay them as soon as possible.

First the Senate, then the House swiftly and unanimously approved the deal, sending the legislation to Trump for his signature.

Within the White House, there was broad recognition among Trump’s aides that the shutdown pressure was growing, and they couldn’t keep the standoff going indefinitely. The president’s approval numbers had suffered during the impasse. Overnight and Friday, several Republicans were calling on him openly, and in private, to reopen the government.

The breakthrough came as LaGuardia Airport in New York and Newark Liberty International Airport in New Jersey both experienced at least 90-minute delays in takeoffs Friday because of the shutdown. And the world’s busiest airport — Hartsfield-Jackson Atlanta International Airport — was experiencing long security wait times, a warning sign the week before it expects 150,000 out-of-town visitors for the Super Bowl.

Trump still made the case for a border wall and maintained he might again shut down the government over it. Yet, as negotiations restart, Trump enters them from a weakened position. A strong majority of Americans blamed him for the standoff and rejected his arguments for a border wall, recent polls show.

“If we don’t get a fair deal from Congress, the government will either shut down on Feb. 15, again, or I will use the powers afforded to me under the laws and Constitution of the United States to address this emergency,” Trump said.

The president has said he could declare a national emergency to fund the border wall unilaterally if Congress doesn’t provide the money. Such a move would almost certainly face legal hurdles.

“This crisis threatens the safety of our country and thousands of American lives. Criminal cartels, narco-terrorists, transnational gangs like MS-13, and human traffickers are brazenly violating U.S. laws and terrorizing innocent communities,” Trump said Friday in continuing to make his case for a border wall.

“Walls should not be controversial. Our country has built 654 miles of barrier over the last 15 years, and every career Border Patrol agent I have spoken with has told me that walls work. They do work. No matter where you go, they work,” the president added.

Though Pelosi and fellow Democrats continue in their strident opposition to Trump’s vision of a wall at the southern border, the speaker said during her Friday press conference after the deal was announced that she recognizes the need for enhanced security, particularly in the battle against dangerous drugs.

“Ninety percent of the drugs come trough the ports of entry,” Pelosi told reporters Friday. “Let us increase the infrastructure where the drugs are coming in, let us increase, as (Senate Minority Leader Charles Schumer, D-N.Y.) said, the technology to scan for that, for drugs, guns, contraband and the rest, let us talk about some of the things we have in common with the president in terms of humanitarian assistance for those coming over.”

“Democrats and many Republicans have said for more than a month that this ill-advised game of chicken over a border wall is irresponsible and does not advance the interests of the American people,” U.S. Rep. Annie Kuster, D-N.H., said in reaction to the shutdown’s end.

“This shutdown is reckless and completely unnecessary and shouldn’t have ever happened. Border security remains a bipartisan priority and I hope this agreement will provide a valuable opportunity to stem the flow of drugs coming across the border and make needed reforms to our immigration system,” U.S. Sen. Jeanne Shaheen, D-N.H., said.

In echoing her thoughts, U.S. Sen. Maggie Hassan, D-N.H., said countless Americans have suffered because of a shutdown that never should have happened.

“We can find a way forward, but the president must stop using people as political pawns,” Hassan said.

Gov. Chris Sununu said he was glad the shutdown came to an end.

“(Friday’s) announcement is good news and brings needed relief for New Hampshire’s furloughed federal employees,” Sununu said. “Politicians in Washington need to get to work and embrace a spirit of compromise over the coming weeks to find a long-term solution that keeps our government open while also securing our border.”

Several Democrats who are likely to soon make their way to New Hampshire for the first-in-the-nation presidential primary took to Twitter for their initial reactions:

“It’s staggering to think about how much federal workers and contractors gave up during this shutdown. For many, what was lost is irreparable. Housing, health care, economic security — the list goes on. We owe it to them to keep the government open.”

“How pathetic. On Dec. 19, the Senate unanimously passed essentially the same legislation that we will vote on today. We are back to exactly where we started. Thank you, Mr. President, for shutting down the government and holding 800,000 federal employees hostage. All for nothing!”

“Federal workers standing in food lines. Medical care put off. Credit ruined. Contractors who aren’t guaranteed back pay. So much suffering caused by the #TrumpShutdown, and for what?”

“Finally – looks like President Trump is agreeing to #EndTheShutdown. It’s infuriating that he put 800,000 American workers through over a month of hell for no good reason. This can never happen again.”

“This needless shutdown was never about national security. It was about playing politics with Americans’ lives for a cruel and empty campaign promise. Let’s open the government and keep it open.”

“Democrats and Republicans agree we need to work together to secure our borders, and we should work together to fix our broken immigration system. I hope the President has learned that he cannot hold the paychecks of American workers hostage in that process.”

“I’m so happy the government is open. Period. And there is no wall money, but there is no permanent status or pathway to citizenship for 1.8 Million dreamers either.”