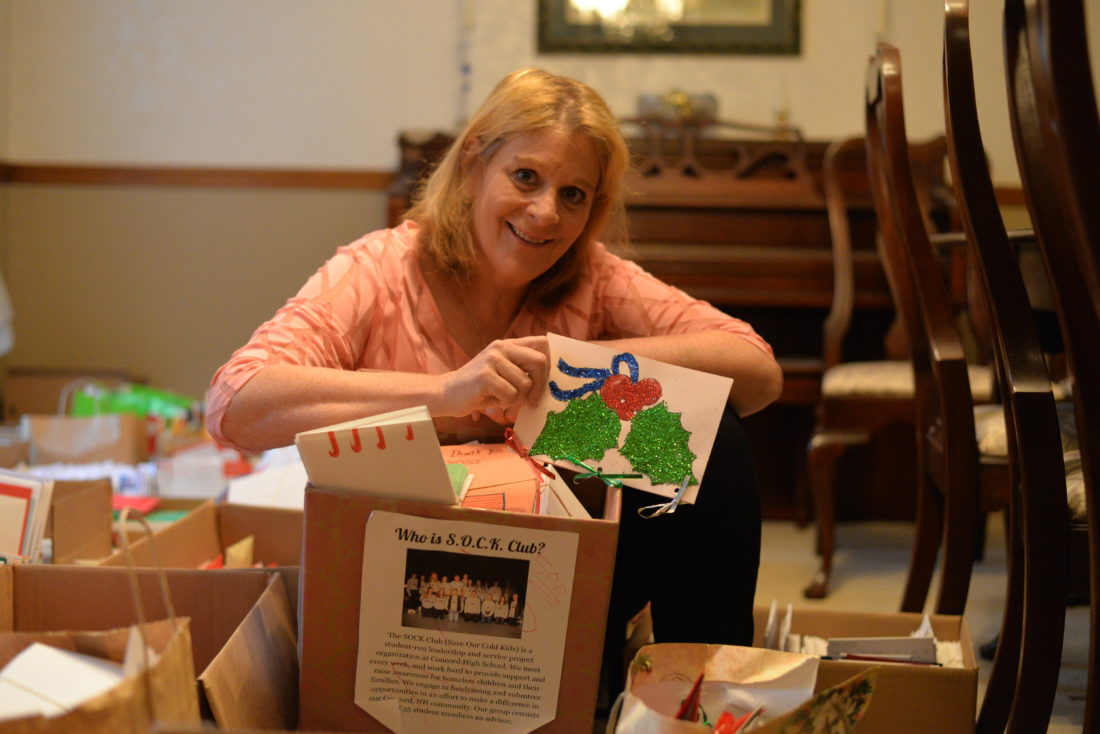 Staff photo by Adam Urquhart Laura Landerman-Garber works while surrounded by the sea of holiday cards that have been pouring into her home through the Holiday Cards 4 Our Troops Military-NH Challenge. In its second year, her tradition, turned statewide challenge, culminated in her collecting 43,000 holiday cards for members of the military serving in all five branches. She was able to go well above her original goal of collecting 25,000 cards, leaving her dining room looking like a Hallmark warehouse. Once she collects the remaining cards, she will mail them next week.

HOLLIS – From the kitchen table to the U.S. Capitol, Laura Landerman-Garber’s family tradition is gradually making its way to other areas of the country as more communities agree to her holiday card challenge.

In just its second year, Landermen-Garber’s nonprofit organization, “Holiday Cards 4 Our Military-NH Challenge,” began with a goal of collecting 25,000 cards this year. Her plan was to send 5,000 to each branch of the military (Army, Navy, Marine Corps, Air Force and Coast Guard).

However, just as last year, she exceeded the goal, collecting 43,000 cards. There are now 33,000 bundled in boxes on her dining room floor, while she believes another 10,000 will arrive by next weekend.

Then, Landermen-Garber will haul these hefty boxes of holiday cheer to the Hollis Post Office to be shipped off to American troops stationed across the world.

“Every card counts, because it does. And we’re small in size but mighty in heart, and all those things sound like a card in itself, but it’s true,” Landerman-Garber said. “The giving, compassionate nature of the Granite Staters runs deep, and they don’t just talk about it – they use their voice.”

Last year, the goal was set at 5,000 cards and she collected roughly 17,000. The project continues to grow, as has received cards from Berlin, Portsmouth, Peterborough, Nashua and numerous other New Hampshire communities.

Additionally, she expects that about half of this year’s haul came from schools across the state after Department of Education Commissioner Frank Edelblut challenged every single school, student and teacher in the state to sign holiday cards.

“There was a little boy, he’s from Nashua, and he wrote: Dear Warrior, thank you so much for your service. Do you know my dad is a Dr. Chief in the Army and he’s in China and so I don’t get to see him very much either and I miss him,” Landerman-Garber recited from the card. “But I know he’s doing good things like you are, so we’ll still have a good Christmas and I hope you do to.”

Landerman-Garber may not have had the chance to meet everyone who signed onto her holiday card challenge, but just as she did last year, she read many of them.

“It’s a way to express themselves to someone that they don’t know, but that they admire,” Landerman-Garber said of the children participating in this year’s challenge. “They’re doing two things. I think the kids are reaching outside themselves to be giving and sharing compassion to someone far away from home, and it’s also giving them a voice to express their own feelings. And anybody who said that the children of today aren’t compassionate or kind or thoughtful – completely wrong. These kids are amazing.”

Landerman-Garber said Nashua Mayor Jim Donchess and his staff have also been supportive, penning 450 cards themselves. Also, the Lions and Rotary Clubs provided donations and signed cards. Landerman-Garber said she probably has 5,000 cards combined from just those two groups.

Now, her initiative is also catching on in other corners of the country, including Florida.

“We have a sister challenge this year in St. Augustine, Florida,” Landerman-Garber said. “A friend of mine from high school saw it on Facebook and there’s a big military presence there, and she started one. She said she will be sending at least several thousand from St. Augustine, Florida.”

The St. Augustine challenge is using the same model, but Florida is not the only state to recognize Landerman-Garber’s work. She said 600 cards will be coming in from Maryland, with more to come, and another 1,000 cards are coming up from Pittsburgh. She also said North Carolina residents are interested in joining the challenge and eventually creating their own. Furthermore, Landerman-Garber has been invited in the Pentagon in December to meet with a lieutenant colonel in the Air Force and a school from North Carolina.

“These are scary times, complex times, and so people are looking for helpers, or to help,” Landerman-Garber said. “They want to help and so by writing the card, by sending holiday cheer to our troops, they feel like they’re doing something.”

As it is, signing a card is a simple enough task that does not require much time. She said this is a nonpartisan challenge that helps people feel like they are doing something, while sending holiday cheer to troops.

Moving forward into next year, she would like to create a website for her nonprofit and would also like to put the word out early that she will be collecting donated cards, whether unused or from major sales at the stores after the holiday season, to be used next year. Landerman-Garber can be reached at holidaycardsnh@gmail.com or on Facebook at the Holiday Card Challenge page, https://www.facebook.com/groups/HolidayCardChallenge/.