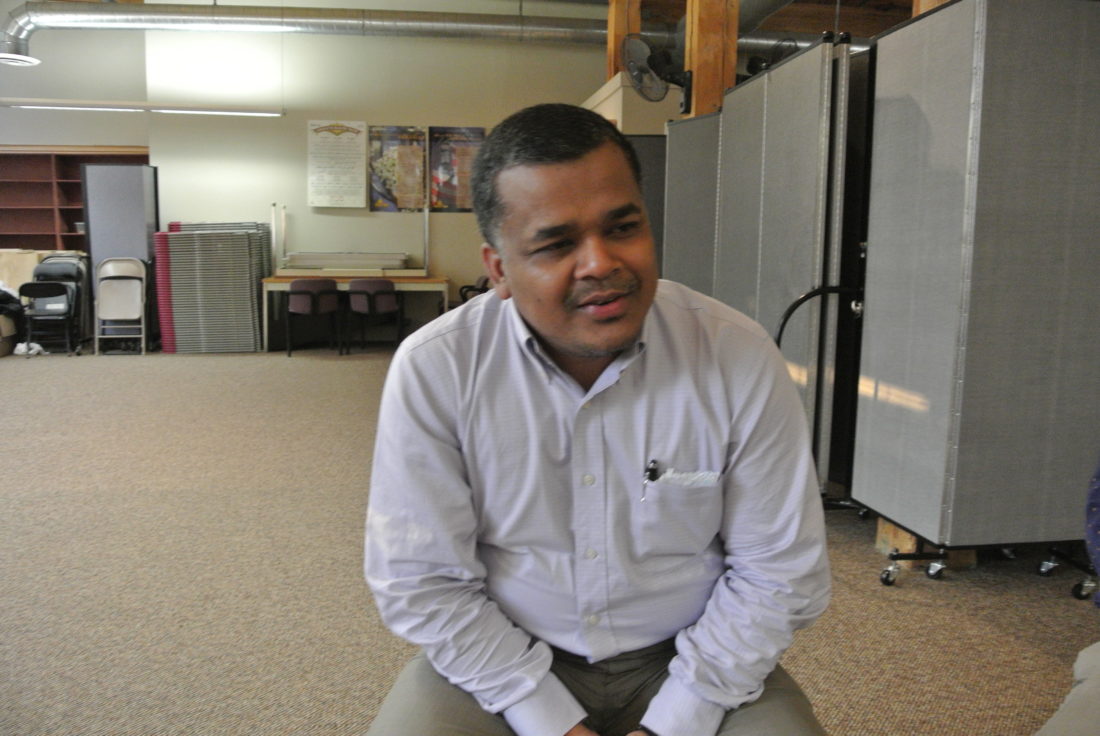 Staff photo by Damien Fisher Muhammad Mustak fled violence in his home nation of Burma, also known as Myanmar. He then spent 17 years as a refugee with his family in Malaysia before coming to Nashua five years ago. He is now a community leader and a business owner.

NASHUA – Muhammad Mustak and his family came to Nashua five years ago as refugees from state-sponsored violence against the Rohingya people in the nation of Burma, also known as Myanmar, in Southeast Asia.

Today, he is a business owner and community leader in his adopted hometown.

Two years ago, Nashua signed on to the Welcoming Cities initiative, a program designed to help create opportunities for people coming to the city from other states and other countries to integrate into the community.

Nashua has a burgeoning immigrant population, with new residents arriving from many other states and countries. New Hampshire’s population grew last year at the highest rate in 10 years, according to the U.S. Census Bureau.

In fact, English Language Learners (those whose native tongues are not English) now make up roughly 10 percent of the Nashua School District’s student body.

“When things come up, we know who to talk to and understand different perspectives,” she said.

Ahmad Ghul, 31, was born in India and has traveled extensively for his career in information technology. The past three years in Nashua he has seen people of diverse communities come together to work toward common goals.

Ghul, a member of the Islamic Society of Greater Nashua, said members of the city’s Islamic community regularly take part in events, such as the backpack drive for Nashua students who need school supplies.

Two years ago, vandals threw rocks at the window of the Islamic Society of Greater Nashua’s building during prayer services.

Lopez said society members make concerted efforts to be part of the community, and it is important to make room for people looking to connect. Nashua officials hope to have more inclusive memberships on board and committees, in addition to more diversity in leadership.

Mustak is one of the leaders to experience the chamber’s training programs, which are made possible by One Greater Nashua, Hall said. He is now a member of the city’s Cultural Connections Committee, which works to bridge the gap between immigrant communities and the Nashua community as a whole.

Hall said incorporating members of the community from diverse backgrounds makes for a healthier and safer city.

“When you help people coming into the community, whether it’s from another country or another part of the state, it’s a really important step in keeping the community safe and strong,” she said.

Aside from the chamber leadership program, One Greater Nashua, a United Way initiative, has helped promote social inclusion and cross-cultural interaction. A particular focus is at the middle school level through youth leadership development, community service, and family engagement strategies.

One Greater Nashua also uses a cultural navigators program to connect newcomers with the skills they need to succeed economically and socially.

Lopez sees Nashua’s embrace of its diversity as a net gain for the city. From the many cultural and ethnic festivals, such as the upcoming Egyptian Festival at St. Mary and Archangel Michael Church, the September Multicultural Festival set for Elm Street Middle School for Welcoming Week, and the annual Greek Food Festival, Nashua can draw people.

“People come from all over the place to experience other cultures,” Lopez said.