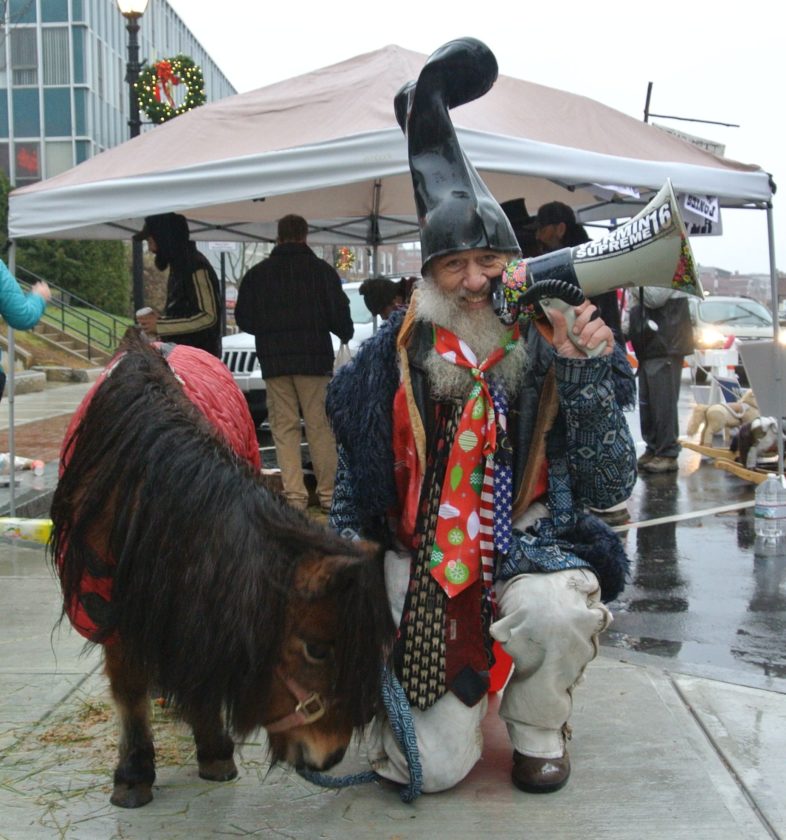 Staff photo by DAMIEN FISHER Vermin Supreme lead a pony protest Tuesday in Concord as former Secretary of State Hillary Clinton was in town for a book signing.

CONCORD – Part political prankster, part performance artist, and completely a man with a rubber boot on his head, Vermin Supreme led a pony protest Tuesday in Concord as former U.S. Secretary of State Hillary Clinton was in town for a book signing.

While thousands of people lined Main Street in Concord to get into Gibson’s Bookstore to see Clinton, waiting for hours in the rain, Supreme and his contingent countered with silly signs and ponies.

Supreme even touted his own book, “I Pony: A Blueprint for a New America” detailing his loss in the 2016 presidential election and his later victory in the 2036 contest.

Supreme spent the day going up and down the line of people there to see Clinton, reading from his book and calling out through his megaphone. Wearing his trademark boot, and multiple ties, Supreme also wore a red car to the protest. When questioned, Supreme said he will not give anyone a pony when elected president, because of his pledge to break all of his campaign promises.

“But you will have had the anticipation of getting a pony,” he said.

Supreme, whose antics include running for president on a platform of free ponies for all Americans, mandatory toothbrushing and the use of zombies for power, sued Concord over his right to protest Clinton’s appearance with the ponies. His protest was sparked by Clinton’s book, in which she equated universal healthcare to free ponies.

“It’s not ponies and unicorns,” said business owner and protester Genna Clay. “It’s about Americans who don’t have healthcare.”

Clay was one of the many serious protesters who made common cause with Supreme. Many, like Josiah Watts, were there to protest the Democratic Party’s treatment of Vermont Sen. Bernie Sanders. Sanders won 61 percent of the vote in New Hampshire’s presidential primary.